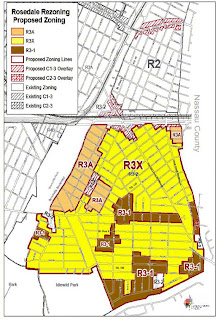 The Rosedale community has won the fight to keep the neighborhood from losing its small, residential character after the City Council voted to rezone the neighborhood last Thursday afternoon.

In a unanimous vote, the full Council decided to change the designations of 260 blocks in the southeast Queens neighborhood after years of urging from residents. Councilman James Sanders (D-Laurelton) said that for too long developers would take advantage of the zoning, which was more than 40 years old, and build large, multifamily dwellings in the neighborhood that has been predominantly populated with single- and two-family houses.

“Our communities are being threatened with destruction by developers who are only interested in making a quick buck, with absolutely no regard for the well-being of the community,” he said in a statement. “The previous zoning rules were abhorrent and allowed just about anything to built in our neighborhood. Not anymore. Today we took a stand to protect our community.”

The plan covers the area bounded to the west by 235th Street, Brookville Boulevard and the Cross Island Expressway; to the south by 149th Avenue, Huxley Street and Craft Avenue; to the east by Hook Creek Boulevard; and to the north by the Belt Parkway.

Homes south of the parkway were zoned R3-2 and allowed for construction of multiple family homes to be built on properties. Now those zones will be designated R3A, R3-1 and R3X, which only allow for one- and two-family homes.

“We will not allow sleazy developers to ravage our communities by taking down stately mansions and putting up cheese-box houses unfit for the designation of a home. We are seeking rules and regulations that say if you take down a one-family home, you can only put up a one-family home,” the councilman said.

They'll figure a way around that. And sadly, you'll probably help them. Although I do like the term "cheese-box house".
Posted by Queens Crapper at 1:09 AM

too late, the damage is done

The damage is done EVERYWHERE.