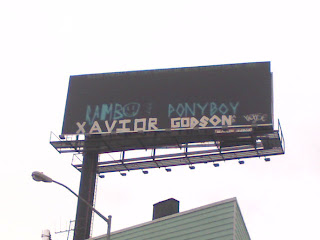 A city attempt to "beautify" highway scenery by cracking down on billboards has backfired, making dozens of the massive signs enticing blank canvasses for grotesque graffiti.

The results have left eyesores on the Brooklyn-Queens, the Long Island and Van Wyck expressways and 72 segments of other roadways and toll approaches in every borough. Many billboards now have incomprehensible scrawlings that read, "Xavior," "Ponyboy," and "Ramboy" -- especially along the BQE.

The wretched art show began in February, when the city won a federal lawsuit filed by advertising companies that both allowed the Department of Buildings to register every billboards near "arterial highways" and also to enforce a rule that no commercial advertising can occur within 250 feet of the roadways. One small firm, Mogul Media said the city's crackdown has been so severe that most of its billboards are blank with many ravaged by graffiti.

So now DOB needs to mandate that the billboards be removed. Problem solved.

Photo from Whatever Whatever
Posted by Queens Crapper at 1:00 AM

Where's Lady Bird Johnson when you need her?

Tear them all down, bill the owners.