Just what we needed 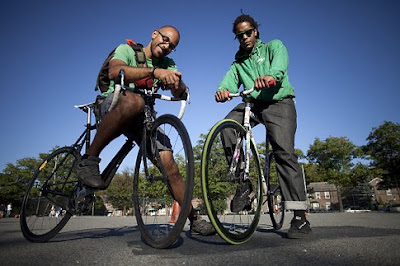 Two avid cyclists are hoping to show the perils and possibilities of biking in Queens with an intense race around the borough.

Professional bicycle messengers Rafael Negron and Tony Monroe are organizing a race on tomorrow along Queens' busiest roads to highlight what they believe is an often overlooked and dangerous borough for cyclists.

These no-holds-barred "alley cat" races pit riders of all skill levels against each other, passing checkpoints to see who is the quickest of the pack.

The contest, dubbed "BLVDS of DEATH," was inspired by the horrific stories of pedestrians and cyclists killed along Queens Blvd.

"We want to show people the wild side of Queens. We want to show you the crazy, fast roads that Queens has that a lot of cyclists would like if they ventured out of Manhattan," said Negron.

Along with bragging rights, the winner will receive a messenger bag and other bike-oriented prizes, such as wheels.

(The loser gets a ghost bike.)
Posted by Queens Crapper at 3:24 PM

"We want to show people the wild side of Queens. We want to show you the crazy, fast roads that Queens has that a lot of cyclists would like if they ventured out of Manhattan," said Negron.


Where do I even begin in deconstructing this fool's ramblings?

A thousand buck cash to the first motorist....I better not finish.

Total morons. These guys are in for the ride of their lives.

But are they stupid enough to venture onto Queens Blvd.?

Somehow, I doubt it. And somehow I think these two will avoid rush hour.

There's never a body-slamming probationary cop when you need one.

I hope they come through Maspeth, I'll have some water ballons waiting for them! = )

(The loser gets a ghost bike.)

Lately I've found cyclists to be a very arrogant nasty bunch......they cut off your car or pass you on the left, and then if you tap your horn to let them know you're there when they ride 2 abreast,they curse you out like the bitch on the bike today near Northern Blvd. and the Cross Island Parkway. Should have run her over when I had the chance.....

Ah Queens Crap, still a cesspool of ignorance and hate.

What would they like written on their tombstones??? Need I say more........

Hey it's a challenge for those in the biking community and they are aiding in bringing to Queens attention to those who would like to bike but can't because of the lack of bike trails for recreation. Queens Blvd is not what I would consider ever, appropriate for biking lanes but at least regardless of their own challenges to demonstrate among themselves of survival, proper biking trails could be designed in quiet park areas to foster recreation - not a bad thing.

Ah Queens Crap, still a cesspool of ignorance and hate.
----------------------------------
So you don't agree with the opinions of other paople, so they must be ignorant? Seems like the people here really seem to know what is going on in their neighborhoods. Hate, you say? It looks alot more like understandable frustration to me.

Many cars (and pedestrians) fail to obey traffic laws, but nobody is suggesting they have no place on the streets?

Why are bikes singled out for this hostility?

Why are bikes singled out for this hostility?

Because many of the bikeriders here now think they don't have to follow the laws and STOP at a red light, little things like that, just like all the cab drivers who don't give the right of way to pedestrians as they should, crossing a crosswalk.

You're just as bad as them sometimes and have added to the decline of the quality of life here. Come down of your higher than mighty soap boxes and join the rest of the human race here, or do you think you are better than everyone else?

I cant stand self righteous bikers, but stopping for or waiting at a red light or stop sign when there is no traffic or pedestrians coming is silly.
Bikers should however stop when there is traffic and pedestrians crossing with the right of way. The ones who ignore this common sense rule anger the pedestrians and motorist who then cry "you must stop at every red light and stop sign"
If people just used some common sense and common courtesy this wouldn't be an issue, the problem is that too many people have neither.

A typical problem is that the morons on bicycles don't have a plan B when they speed southbound on 8th Ave and the light turns red N/S and a mass of pedestrians immediately start walking across the avenue...but there's no gap wide enough for the bike to slip through and not enough time to stop. Impact.

"Because many of the bikeriders here now think they don't have to follow the laws and STOP at a red light, little things like that"