Trash tax in the works? 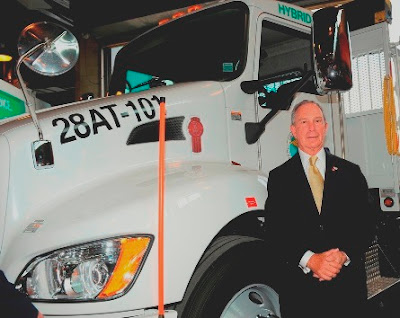 There was a move Thursday to spin garbage into gold.

City residents produce 11,000 tons of trash every day. Collecting it is covered by taxes.

But there is a proposal to separate garbage collection from general taxes, and charge people for what they throw away, based on how much it is.

Plenty of New Yorkers are turning up their nose at the idea.

"I'm very much against it," one resident said.

"I think we pay a lot of taxes already," another added.

Mayor Bloomberg said while a trash fee is far from "in the bag," he refused to rule it out as the city struggles with a financial crisis.

"Everything will be on the table," Bloomberg said.
Posted by Queens Crapper at 12:48 AM

Does that mean I can charge those scumbags I chase off my property every week that dig through my trash?? Bloomberg your such an ASSHOLE!!!

Next we will be paying for police protection and to have our burning houses put out. WAIT!! Don't stop there, we could pay our politicians to do jobs for us and make our laws, WAIT!!! We already do that by paying our taxes.

Where does he get these ideas?

I can't wait to get home and find a computer generated bill for additional bags that will have been illegally dropped by some driveby dumper looking to avoid there own bill.

Perhaps we will all have to invest in home based security cameras to time and date stamp these events.

This would furnish proof that the homeowner is not the culprit.

However, no one will compensate that person for their time invested in court to fight the fine.

I submit that if this regulation is
initiated by the City, there be a requirement that Enviormental Control Board and it's hearing officers be required to work both Saturdays and Sundays so that hearings can be held on weekends.

Amen to that. Already got 1 ticket because my neighbor who refuses to recycle sticks his garbage in front of my house after I leave for work.

Nice! It'd be even better if they charged by weight/volume.

yeah and next people will be dumping their shit at our door. what about all the people who don't own homes? who's going to pay for their trash? we have people now dumping on the main avenue who live above the stores, because the landlords don't supply garbage cans. i say let's all go to bloomturd's property and dump there he can afford it :)

"Everything will be on the table," Bloomberg said.

It will never work.

If residents get charged to throw out their garbage, everyone will start dumping their trash in the woods, on the side of the highway, on the streets, etc...

There is no way to monitor it.

A final note about the comment to "raise the real estate tax"...you're an idiot.

Why would anyone every suggest to raise taxes..!

I think every political figure getting caught bs'ing the people pay a 75% of their yearly salary in a tax. Our deficit would come down within a few hours and there would be no need for them to tax us into the poor house

So since this will be billed seperately, we can expect a deduction on our city and real estate taxes right?


Its not as if the city was doing this for free out of the goodness of their hearts...WE ARE *ALREADY* PAYING FOR TRASH COLLECTION!!!!


Same BS with the water. It was never "free." we always paid for it. They just make it sould like we were getting a deal all along before.

I'd gladly pay some burly private sanitation guys to put Der Gloomberg into a container to be emptied into a sewage retention tank!

We can negotiate the fee later.

Mayor Bumberg keeps on promoting over development plans like Flushing Commons which will generate even more trash.

During our current financial crisis...can some "bright light" at the EDC please explain WHY WE SHOULD BE SELLING OFF A REVENUE GENERATING MUNICIPAL PARKING LOT IN THE HEART OF FLUSHING?

What does it earn in fees and fines?

Would Councilman Halloran (since Koo is out to lunch) please demand an answer to this question?

And you too Comptroller Liu....don't the taxpayers have a right to know the figure?

I think the disappointed public would like to see Bloomberg's head on the table with an apple....make that a turd....stuffed in his mouth!

Thank you Comptroller Liu for sqeazing those liars at the EDC to turn over the money the city gets from all those Times Square rentals!

That could have put a big dent in the city's "financial crisis".

Foreclose on Tommy Huang's (and other sleaze bag's properties and NYC wouldn't have to scrounge up nickles and dimes for revue.

There are millions of dollars that NYC can collect if mayor Bum-turd would squeeze his deadbeat wealthy friends who are in arrears!

So stop pulling our chains and going for petty cash fines from us hardworking taxpayers!

My real estate taxes have already been raised on my modest home.

Why not overtax my elderly ass out of it altogether...you damned ignorant Bloomberg ass kisser annon# 8!

How about this: Eliminate the bottle refund.

Keep the charge of 5c to each one, but eliminate the return (jsut call it a tax on using a pollutant).


The added benefit is, it stops members of the 'vibrant and diverse' community from rummaging trough garbage cans all the time.

Where are the photos of him standing proudly in front of one of his private airplanes?

Why does he never discuss HIS OWN carbon footprint on John Gambling?

Yeah, can't wait for all my neighbors who have illegal tenants (whom the DOB doesn't seem to give a crap about)try and dump their garbarge in my garbage cans. What an ass

he says "evertything is on the table" Everything but a tax increase that will hit his own demographic is what he means.

Kick this guy out of office, impeach him, sue him for violating election eligibility laws.

No new taxes - there will surely be a revolution in the city if an another stupid tax is raised or imposed.

Don't count on me for help. I already have issues of waist management!

Please get this man out of office. Is there anyway we can have an emergency vote and vote him OUT!

I can dream can't I.

Try and charge me extra for my trash removal and I'll dump my crap in Chuck Apelian's tony cul de sac right in front of his door!

In fact I recommend we all dispose of our garbage at our local community board's headquarters!

Just lift a manhole cover nearest you and drop your garbage down the sewer like the Chinese have been doing on Main Street near 41st Avenue in the wee hours of the morning for years.