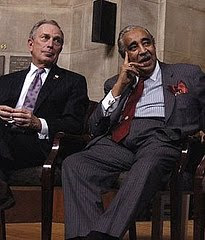 This summer, a bevy of aspiring elected officials have received the coveted invitation to be feted at private wines-and-dines at the mayor’s Upper East Side town house.

The candidates, who typically leave with a promised $2,300 check from the mayor (the federal limit) and pledges from other invited guests, represent a range of ideologies, but many share the mayor’s views on issues like gun control and charter schools, and have reputations for bucking the party line.

In using his power as a political fund-raiser, Mr. Bloomberg is attempting to kick-start his third-term agenda by accelerating change in Albany and Washington.

He's not thinking much of Charles Rangel these days, though.
Posted by Queens Crapper at 12:39 AM