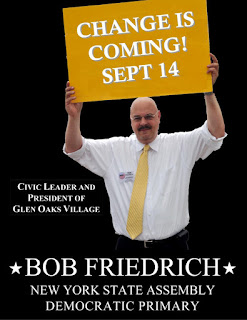 Within minutes of the midnight deadline on July 15th, in true “politics-as-usual” fashion, David Weprin filed a petition challenge with the Board of Elections in the NYS Democratic Primary Assembly race in the 24th Assembly District. Since Bob Friedrich is the only other candidate in that race, Bob said,

“I can only conclude that the sole purpose of Weprin’s petition challenge is to disenfranchise voters of the district by attempting to remove me from the ballot so that he can run unopposed in the Democratic Primary. Attempting to disenfranchise voters will only increase the already strong anti-incumbent sentiment that exists among the electorate.”

David Weprin knows that the Friedrich petitions are proper and performed in accordance with NYS Election Law. He is well-aware that his brother, Mark Weprin, chose not to challenge Friedrich’s designating petitions in the last election after carefully examining and inspecting them.

In June, BOB FRIEDRICH asked David Weprin to join him and take a “No-Challenge Petition Pledge” so that district voters would have a choice of candidates in the Democratic Primary for Assembly for the first time in a decade. WEPRIN refused. Bob commented,

“David Weprin likes to talk about “change” and being a different kind of politician, but his actions speak louder than words. Protecting the Weprin family dynasty is more important to David Weprin than the rights of district voters to have an election with a choice of candidates.”

Friedrich is confident that David Weprin won’t succeed in his challenge since the Friedrich campaign has submitted almost 3 times the necessary number of petition signatures required by law.

“I can assure the voters of the 24th Assembly District that we will be on the ballot in September and they will have a choice of candidates. Change is coming on September 14th.”

By filing a procedural challenge to the Friedrich campaign’s petition signatures, Mr. Weprin is alleging that Friedrich’s campaign volunteers, most of whom are middle aged adults or senior citizens, did something wrong, unethical or unlawful. This is a “slap-in-the-face” by Weprin to the more than 60 hardworking and enthusiastic volunteers, including many civic leaders who donated their time each evening ringing doorbells of neighborhood residents and gathering qualifying signatures in accordance with NYS Election Law.

It is shameful that David Weprin seeks to bring the North Korean example of elections to our Assembly District by robbing voters of choice in his attempt to knock his ONLY opponent off the ballot so that he can run unopposed as he has done in every primary election.

Bob Friedrich is confident that these types of political shenanigans will be rejected by the voters in the September Primary.
Posted by Queens Crapper at 12:09 AM

is not dictatorship grand ?

Time for those Weprins to find real jobs where liitle Mark and David actually do some work.

Somebody ought to chalange Friedrich on his mental capability.

P.S. #2
Compared to the Weprins (not that I like them)...Bob's an arrogant blustering boob!

Challenging petitions is a perfectly legal thing to do. If you can't take the heat, stay out of the kitchen!

So where is QCC in all this?

Why is there no movement to ban this type of behavor by the machine?

We see this over and over again. What the hell is the problem, here, people?

He's got my vote.

Anonymous posted:
"Somebody ought to chalange Friedrich on his mental capability.

Who's the moron here??? This person is not even capable of using spell check!!! Talk about mental capability. My advice is: when you are trying to tear someone down, your comments lack credence when you can't even spell correctly!

Friedrich could challenge Weprin's petitions too. Fight fire with fire. Don't cry like a baby.

(I guess Friedrich doesn't like being criticized on QC).

If you can't stand having your shoes pissed on early in the game...then stay out of the toilet!

He looks like he could be convicted rapist Dennis P. Gallagher's twin brother!