EDC knows all there is to know about the lying game... 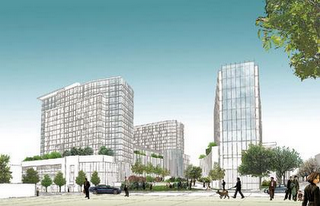 As the controversial Flushing Commons development inches closer to a vote in the City Council, shopkeepers and elected officials alike are waiting for the city to reveal the details of a business assistance program that could make or break local retailers.

The available information is in the city's Environmental Impact Statement, required for any large land-use project. It states Flushing Commons will not directly displace businesses nor will many be pushed out by competition with Flushing Commons' stores.

A group of skeptical locals - the Flushing Coalition for Responsible Development - recently commissioned its own study to fact check the city's Environmental Impact Statement.

"We wanted to do an economic study so we could determine what made sense for a business assistance program," said coalition member Jim Gerson.

The main discrepancy between the two analyses is that the city counted 970 storefronts within a 1/2-mile radius of the project and the other, prepared by Hunter College, tallied 2,100 businesses.

"If you use the 2,100 figure, that $2 million would amount to only $26 a month for each business over the construction period," said Brian Paul, a fellow at the Hunter College Center for Community Planning and Development.

"Our EIS was conducted by experienced consultants over the course of several years and followed a rigorous and approved methodology," said David Lombino, an agency spokesman.

The Hunter College report "was written by a group of graduate students in a matter of weeks, and significantly misrepresents aspects of the EIS," he said.

"The City's Economic Development Corporation as represented by Mr. Lombino apparently has not consulted the Hunter College report which they dismiss. The title page notes that it was prepared not by a bunch of students but by myself (Professor of Urban Planning at Hunter College) and Hunter College Fellow Brian Paul, who did most of the work under my direction. The fact that EDC consultants spent years and couldn't even get the number of local businesses right raises the question about who the amateurs are. Those of us familiar with the work of EDC's consultant, AKRF, are not surprised at the size of their mistakes and the equally inflated size of their bills to the taxpayers. The fact that we could turn up such a basic error in such a short time with limited resources should be disturbing. The number of businesses affects so much of the rest of AKRF's conclusions in the EIS and thus calls into question the entire study."

Told you EDC lies pathologically.
Posted by Queens Crapper at 12:17 AM

Malba Gardener said...
This comment has been removed by the author.
Tuesday, July 27, 2010

This is so typical , all the studies presented to CB7 regarding any development is always one sided (for developer) and when you question it, the agency tries to discredit you. Good for you Mr. Paul, good for you. Our group has been requesting for years to see the "Impact Studies" for Waterside Estates and the remaining Parcel of the old CYO land and no one can come up with anything including
CB7. Meanwhile we have over 100 new homes with a minimum of 55 more slated to go into construction on existing (non) infrastucture, with no concern for neighborhood effects, such as traffic, sewage et al..

We heard that "doofy" Dan Halloran put on a good spitfire show (as to be expected) in the council but he'll, no doubt, vote to approve Flush-Com just like he supported it at CB# 7!

You only won because Kevin Kim was an Ackerman puppet!

Now...reply to that or let one of your blog watching trolls do it for you!

Where is the diminutive, elusive inscrutable Wellington Chen these days?

Hiding under Michael Meyers' skirt so that no one will connect him to the Flush-Com con job?

Suggestion for the coalition:
Picket Chen's Little Neck home and put him directly in the spotlight.

You can look up the address in the city records.

A contingent in front of Myra Baird Herce's Queensborogh Hill residence would do wonders too!

The real purpose of CB#7 is to contain the over development in the downtown corridor and far enough away from i.e. Apelian's or Kelty's homes.

Don't a lot of its members live away from Flushing's congested epicenter?

Hasn't Halloran the Man proven Repulsive? What a sham, sorry I meant shame.

What a sham, sorry I meant shame.

Right on both counts!

Why are people surprised by Halloran's decision? HELLO PEOPLE!! Where the money is is how the politicians will vote! When are people going to start seeing this??? It happens at the city level and even more on the federal level.