That Miss Heather is a sharp one! 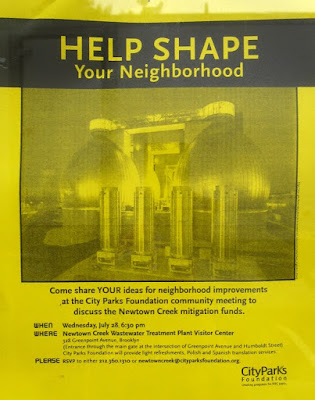 So last month I shared the good news about our fair neighborhood (and others) receiving several million dollars of “mitigation” funds and implored you to take the Newtown Creek Survey so as to give your two cents on how you want this money to be spent. Well, now we are on step #2: this upcoming Wendesday, July 28, at 6:30 p.m. at the Visitor’s Center of our very own Shit Tits the City Parks Foundation will be hosting a brainstorming session (replete with refreshments!). Here’s the 411 per their e-vite:

"At the meeting on July 28th, you will hear about four specific projects that have already been suggested to the Department of Environmental Conservation by the groups that successfully advocated for this $7 million of funding. You will also hear about a recent brainstorming session held among Brooklyn groups about community preferences for open space projects. In addition, you will hear about the results of the surveying that City Parks Foundation is now conducting in Brooklyn and in Queens."

I have to confess I am more than a little confused here. Why did they put forth a survey if four projects* (*which I have been told are:

have already been brought to the table? In what way (if any) were these surveys used to inform the “brainstorming sessions” that were conducted by the aforementioned “Brooklyn groups” regarding open space projects? Truth be told it leaves a rather bad taste in my mouth— but I suppose I’ll have to go to the meeting and find out.

Yeah, if you recall, I had the survey in the sidebar for people from Hunters Point, Blissville and Maspeth to fill out because it was my understanding that those neighborhoods would be included in the process. Well, it looks like that was all a waste of time, because 4 Brooklyn projects that no one but a select few had input on are likely to be the ones funded. And they are projects that the city was already committed to fund anyway. What a gyp! I also doubt these CityParks Foundation fliers found in Greenpoint were posted anywhere in Queens.
Posted by Queens Crapper at 8:47 PM

What MTA lot? Is this the old depot in Greenpoint?

It's known as 65 Commercial Street.

Looked it up on Google Street View. It is, or is part of the old Crosstown Depot, which goes back to the trolley days, It's probably too small to be of major use to the MTA.