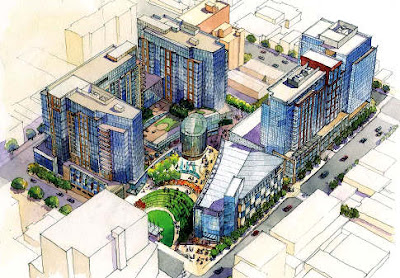 Mayor Michael R. Bloomberg won a victory for his development agenda on Thursday when the City Council approved a plan to build hundreds of apartments and thousands of square feet of office and retail space in the heart of Flushing, Queens, one of the city’s most densely populated neighborhoods.

The decision — in a 44-to-2 vote, with 5 abstentions — came on the same day that the Council approved a $1.5 billion plan for a residential development at the site of the former Domino Sugar refinery in Brooklyn. The dual approvals give new life to Mr. Bloomberg’s agenda, which suffered a stinging blow in February when the Council rejected a plan for a mall at the old Kingsbridge Armory in the Bronx.

The Queens project, called Flushing Commons, faced hardly any questions from council members, in large part because the councilman who represents the area supported the plan.

The only council members who voted against the project were Brad Lander of Brooklyn and Gale A. Brewer of Manhattan, who wanted more than 140 housing units to be set aside for low-income families.

Mr. Koo and Mr. Bloomberg met Thursday night for a celebratory dinner at Ah Ree Soo, a Korean restaurant on Flushing’s Main Street. The gathering underscores the importance of the project, which the mayor characterized as “a major milestone in our efforts to position Flushing for long-term economic growth.”

Still, questions remain about the impact that Flushing Commons and a similar development proposed for Willets Point would have on the No. 7 subway line, which is stretched to near capacity during peak hours. There are no plans for improvements on the Queens end of the line, and there likely will be none for a while.

Oh how precious...Koo and Bloomie munching on kim chee to show their love for Koreans.

And what about the dead bodies?
Posted by Queens Crapper at 7:32 AM

If you voted "yes" C.M. Halloran I will be voting "no" when you run for re-election!

How nice...a little a tete a tete...Koo & Bloomie grabbing munchies.

What about Peter Koo & Michael Lee?

Haven't they been 69-ing like the tight asshole buddies that they are?

Could Koo actually be a silent partner in Flushing Commons?

Time to move out of Flushing. As if the new mall at the Caldor site won't be crowded, add this to the mix. Navigating around Main Street will be near impossible.

Forget riding the 7 or catching a bus, there will be no room on either. Don't these people see how overcrowded Flushing already is!

The Koreans were just holding out for more "traveling money" when they move their business off of Union Street.

They were never going to butt heads with the all powerful Chinese interests in the first place.

Their "protests" were just a song and dance...all part of the "Blow Hole Theater" of the absurd's production company.

I even doubt very much that their figures on the 2,000+ businesses being displaced was accurate.

Could it really contain that many...unless they were desk rental and answering machine "businesses" operating out of closets or apartments?

Who gives a flying f--k?

I live 3 miles east and bypass that whole stinking dump on the LIRR!

Glad I took the advice of a confidant in the city planning commission back in 1975 when he advised me to buy my home, "...East of 155th Street and north of Northern Boulevard..."

He also indicated that downtown Flushing was earmarked and red-lined for over development as far back as the late 60s.

Thanks, my city planning friend for your wise counsel.

I have an appointment with a plastic surgeon to reverse my "round eyes" so the Asiatics will more readily accept me.

The (approximate) hushed words as I heard them spoken by two elected officials, circa 1987:

"We don't know if we can confine the congestive development (Oriental-ization) of downtown Flushing.

We are concentrating on seeing that it does not spread to the adjoining low density residential neighborhoods".

Might those pols in '87 have been the Stavisky/Hillman team?

" A little song, a little dance, a little seltzer down the pants"...all according to the script!

Did anyone think the council of thieves would vote contrary to what CB#7, Helen Marshall and the rest of the mishpooka voted to approve?

Too bad... Too bad for the common people. It's us common little people that complains and can't do much about.

If you want power, go into business yourself and build it up and have money and become very rich AND THEN you can voice your opinion.... otherwise be quiet because your voice means squat because you ain't rich like bloomturd or Mr.Kool.

So become rich and get into development and then fight back otherwise we are nothing but little complainers if we don't like something.

"And the nominees are:".

Time for the "little duke" Wellington Chen to come out from behind the curtain and step up on stage to claim his "Golden Egg Roll" award for his starring role in "Flush-Com".

We haven't seen his face in print since that photo of him shoulder to shoulder with bovine ex-boro prez Claire Shulman.

Come out, come out, wherever you are.

Could he and Mike Meyers be boning each other?

H-m-m-m....who's the submissive bottom in this other great land theft deal?

"If you want power, go into business yourself and build it up and have money and become very rich AND THEN you can voice your opinion.... otherwise be quiet because your voice means squat because you ain't rich like bloomturd or Mr.Kool."

And then after you become rich like that, you also start mingling with these turd and kool people feeling like an elite group and thus forgetting about how you were not like them and how you used to complain about them.

Why? Because mingling with them is forming connections and it's all about connections which will get things done in the big business world. Face this fact.

Don't trust me? or thing it will not happen to you? You will be naive if you think that way. I'll bet you, that you will if you do ever end up as rich as them and can earn more money from this development.

I'm up in the air about this whole thing. It does'nt take a genius to notice the degrading quality of life here in Flushing. Some housing area's look like the slums of the 1920's (maybe a little better). So will this Flushing Commons project upgrade the area?
Or will it cause congestion to the point where the DOT will have to close of traffic to the public and only allow buses in that area?
I think the traffic problem will be unavoidable. It's a disaster now at 4PM. I cant imagine what it'll look like in 5 years.

She had the courage years ago to speak the truth about what was happening to Flushing and her political career was destroyed as a result.

I think it's great.

I've always wanted to live in a sardine can.

I agree with Joe for Council..
It might upscale the area if
done nicely and properly.
Otherwise, forget it.

It might upscale the area if
done nicely and properly.

When during the reign of Bloomburg has ANYTHING been built "nicely and properly" in Flushing? Or anywhere in working- or middle-class areas of NYC? This out-of-scale disaster is the final nail in the coffin of my beloved hometown.

Waiting for them to move Bowne House.

Waiting for them to move Bowne House.
Move? This is Flushing, it will be torn down.

Of course Dan the Man voted yes they probably got togehter and decided who was going to vote no and who yes, to make it look like some voted no, but I would bet all these crooked dirtbags have their hand in the till. I bet Kelty, Apellian (AKA; Vallone), are all going to cash in real soon. WE REALLY NEED TO GO TO THE POLLS AND VOTE EVERYONE CONNECTED WITH THIS OUT OF OFFICE. WHAT GARBAGE WE HAV COLLECTED. SHAME ON ALL OF YOU

no big surprise. Comrie and Christine Quinn both fat ugly balls of shit.

I hope the choke on their kim-chee.

it will be filled with more asains. not far from main street.

There goes the neighborhood. Oh wait. That sampan has sailed a long time ago!

What about Flushing Town Hall?

Flushing is never going to go back to the way it was - so, let's hope that this will upgrade the nab.

If your idea of an "upgrade" is to wait until 4 subway trains pull out until you can finally board one and squeeze into a moderately overcrowded car on the Main Street platform...you're a nut job!

This is an Asiatic model for "living"...cheek to jowl...nose up your neighbor's ass!

Only a back hills coolie from a remote province in China would tolerate such a life!

We hear that Wellington Chen is being considered for the post of "mayor" of Fru-shing.

Everybody seems to be missing something.

A tip for a lead story:
Pay attention you "Daily News" investigative reporters.

Maybe ALL'S NOT WELL IN FLUSHING THANKS TO CHEN!

NEVER FORGET THAT NAME!
What are his connections?
He was around way at the beginning of it all.

While Flushing's "bad boy" Tommy Huang was capturing everybody's attention with his criminal acts and diverting the public awareness away from the real culprits that were sealing Flushing's future for the worst...perhaps it was the low key Chen who quietly operated with immunity and passed under the radar!

FYI:
Marilyn Bitterman always seemed to think he was the best...judging from how far her nose was always up this tiny giant's hole!

The real truth:
Flushing was sold out from under by crooked politicians, overseas corrupt interests and collusive factions among CB#7 "illustrious" board members!

Flushing IS a mess.

Just leaving Flushing the way it is is NOT a good idea.

I realize it's hard for you to think positively about anything so let's just all be thankful that you are not responsible for anything other than your own miserable self.

aww too bad no angry opponents killed both while there were in a KOREAN restaurant...shame shame. and so close to the doomed community too

Our poor little blabbering, blithering, befuddled, lady baboon sure likes to listen to her own bemoaning!

How about putting a cork in it
or take a course in intelligent discourse?

Now she's wiping her tears with her sleeve.

I'll bet she lives no where near downtown Flushing anyway.

With the new low density zoning they can't build their high rise monstrosities.

Even if Councilman Halloran abstained from voting on the Flushing Commons project...I'd take that as if it were a "yes" vote for approval.

Furthermore...remaining neutral would add insult to injury and make him a common coward!

Hey! Keep me out of this! The difference between Babs and me is that I think before I speak so please get the "L" out!!!