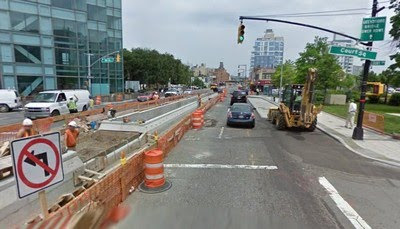 A HANDFUL of businesses sidelined by a sidewalk overhaul in Long Island City are steamed at the city for not giving them a better heads-up.

But city officials said they were notified - albeit verbally.

Merchants said they were stunned last week when they came to open their shops on Jackson Ave. and discovered the sidewalk had been torn up. Some were even denied entry to their own stores, they said.

The construction - part of the Economic Development Corp.'s Jackson Ave. Streetscape Project - came with no warning, some storeowners said, and the work cut their profits by at least half.

"They started digging, and they didn't even tell us," said Pentip Mulkern, 40, owner of Thai Express near 23rd St.

"I never got any notice at all. There has to be better communication."

EDC officials said they did notify those affected - twice.

"The businesses along Jackson Ave. were provided with verbal notification up to two months ago that construction would be taking place between 23rd St. and Court Square, and that some disruption should be anticipated," said EDC spokeswoman Libby Langsdorf.

Storeowners got an additional reminder two weeks before construction began, she said.

Verbal notification? That's not acceptable. (They really said that because they think that absolves them from having a paper trail.) You're supposed to disseminate written notices about street repairs through the community board, who in turn notifies affected businesses and residents.

EDC lies. Pathologically.
Posted by Queens Crapper at 12:34 AM

I could not believe the scope of this project and find that it will be an assest to the area. But to shut out local businesses from opening because of it?????

Spending more than $20 million of your taxes on this short stretch of road.

Ask her if her family is going to a substandard school or needs to go into the next boro for a hospital bed.

Is this verbal notice thing reciprocal?

I would like the city to accept my verbal notice as binding on them.

Its not just Bloomberg, its every freakin agency (EDC?) and elected officals (Cong Maloney treating Dutch Kills like its invisble but giving millions of their taxes for businesses and suburban communters?)

And that unnecessary escalator between the G and the 7 is making a transfer there torturous. You have to walk a full block, cross 23rd street and edge around the construction. No end in sight.