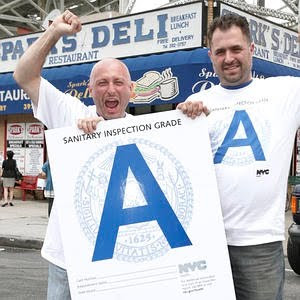 A deli in Queens gets New York City’s first A for food safety.

The city rolled out its new system of awarding letter grades to restaurants Wednesday. Health Commissioner Thomas Farley presented an A to Spark’s Deli in Long Island City.

Deli owner Jose Araujo says he’s proud to see the A in his window.

The city awards grades based on cleanliness and whether food is kept at the right temperature. Restaurants that don’t earn an A the first time will be given a chance to bring their grade up before they must display a B or a C.

Farley says most restaurants maintain good conditions, but lapses in food safety can cause preventable illnesses.

Meanwhile, ethnic restaurateurs are concerned that they will fail inspection.
Posted by Queens Crapper at 1:46 AM

I fail to see how ethnic restaurants that were passing inspection before think they may fail now. Keep your restaurant clean,hot food hot, cold food cold, and you have nothing to worry about. Talk about trying to put a racist spin on something that doesn't need it. Give me a break.

i can understand how it's difficult for INDEPENDENT restaurants to meet health standards...and how they may struggle when they incur costs related to structural upgrades to meet standards.

that said, the independent restaurants in new york city - ethnic of otherwise - are some of the most disgustingly infested, filthy, and unsanitary places i've seen anywhere in this country.

bravo for making it easier for us to know where the rats and roaches are. accountability at its finest.

Now, if we could only have a grade system for New York City agencies. Wouldn't accountability be a great thing? I'm sure they would all flunk with flying colors.

Nope, the ethnic angle, like smoking (hookahs?) and just about anything else that has an ethnic component, will sink it.

"bravo for making it easier for us to know where the rats and roaches are. accountability at its finest."
Guess what? Rats and roaches are all over Manhattan, and not even the finer establishments are immune. Anything near an underground subway has mice and or rats. There are excellent restaurants in Manhattan that are in 80 or 100 year old buildings. These old buildings are infested beyond belief.

The City had better be braced for litigation unless they upgrade the consistency of inspection and inspectors.

Example: Meat thermometer. It has to be located at the grill but no one uses it after they gain experience with that particular surface -so it often get shunted aside and though it is -always- present, the inspector might not see.

Some will ask and when you show it to them -that's it. Others will simply write a violation.

Another ongoing situation; at crush time (lunch-dinner) the bayman will often leave a jar of coleslaw at the cutting/finish table. From a purely technical standpoint this is a violation but at these times we go through a jar every 20-30 minutes max. The stuff is still cold. Again one inspector will ask, another will ignore and yet another will write.

Another violation was for "flies". Well, if you going to have open windows and doors in the summer, you will get flies. We use zappers and but that is all we can do on this.


I could write a page or two more on this.

Since troubleshooting is my responsibility in our business, I have to deal with those issues and decide which are potential health concerns and which are not.

Under the point system we rarely, if ever had enough to require a followup inspection, and the results of these minor issues are easily ignored by the public.

Repairmen like myself that have to work in basements and sub basements in this city would beg to differ with you...


It's amazing this is finally rearing it's ugly head in NYC. I have worked in commercial and residential buildings on a daily basis for the last 20 years in NYC and I COULD WRITE A BOOK about what goes on in restaurants. If I DID write my book, no one and I mean no one would eat a meal out ever again. Disgusting.

My point is, this city has ALWAYS turned a blind eye to what's going on in restaurants because THE INSPECTORS GET PAID OFF. JUST LIKE THE D.O.B. "inspectors" GET PAID OFF for construction violations.

Is everyone here new to this city? How naive can you possibly be?

Maybe I should write that book!