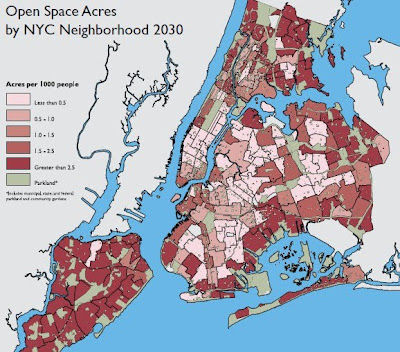 The map illustrates the range of access to parks across the city. Areas colored by the darkest shade of red --in Staten Island and the northern neighborhoods of the Bronx-- have excellent open space provision (more than 2.5 acres per 1000 residents). However, central Brooklyn and Queens, depicted in light pink, are expected to receive large numbers of immigrants over the next two decades and will suffer from inadequate access to open space. Planning for new parks in these neighborhoods now will help the City to accommodate its new residents in the years to come.

I like the gerrymandered report. This isn't showing it by zip code or community board district. Instead it's broken down by tweeding standards set forth by Amanda Burden. Also begs the question why Green Shores and trust for Public Land are teaming up to present a series of listening sessions about new park access along the Ditmars waterfront when, according to this "official" map, there appears to be plenty of parkland in that area already. Why not concentrate efforts elsewhere?
Posted by Queens Crapper at 12:39 AM

How do/did they determine the boundaries for an area?

Note that the Green shores folks seem to speak in concert with Peter Vallone - going apeshit (as he) over the poluted rat infested Steel Equities site while they studiously ignore the area south of Astoria Blvd (away from Ditmars) is to be walled off with high rises.

Big noise on looking for new park space along the North Shore while they cant even take care of DeMarco and Astoria Park ... also on the north.

must we go to astorians.com again? said...

Seems all they do is cover for the cutback in Parks by doing the cleanup themselves and help the developers by trying to get a hipster buzzz along the waterfront.

What about all that open space between Bloomtard's ears?