Some streets are paved with stone 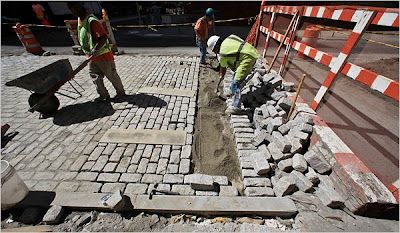 On a stretch of Greenwich Street in TriBeCa, a construction site hummed with the usual activity. Workers encircled a crane removing dirt from a trench. Others mixed concrete in a wheelbarrow.

But nearby, men in dusty denim were uncharacteristically crouched on hands and knees, working beside a mound of cobblestones, finding just the right one to put into place.

As a result of a preservation rule that a thoroughfare in a designated landmark area, once altered, must be restored to its original state, this street and others in the neighborhood are being torn up and resurfaced with cobblestones as part of a large-scale reconstruction, expected to be completed in October.

Approximately 15 miles of cobblestone still remain in the five boroughs, according to the New York City Department of Transportation, mostly preserved in historic districts including SoHo, Greenwich Village and Brooklyn Heights. Now, a few cobblestone projects are under way around the city.

So, in SoHo, Greenwich Village and Brooklyn Heights even the streets are preserved. Meanwhile, back in Queens, if you want something preserved, the borough historian says you are "afraid of change"...
Posted by Queens Crapper at 12:18 AM

Remember when Jamaica Avenue was paved with red bricks?

And Sutphin Boulevard as well,

Then when you run their face in it the ol' knife in the back.

It's amazing how they find the money for reconstruction (far different than preservation, btw), but not for transportation, school, and better salaries for NYPD and FDNY.

It's amazing how they find the money for reconstruction IN MANHATTAN(far different than preservation, btw), but not for QUEENS transportation, school, and better salaries for NYPD and FDNY.

Why? one word: Doormat.

Queens has a lot more doormats that end up blaming themselves or tripping up someone that tries to do something about it.