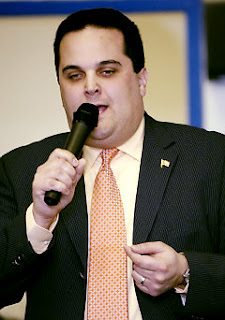 But fellow Queens Republican Anthony Como, who is running against State Sen. Joe Addabbo, will not.

The party’s executive committee officially submitted its endorsements on Monday.

Both riled members of the State Independence Party by using members of the party’s rival New York City faction to gatherer their petition signatures. Padavan was pulled from the precipice thanks to his longstanding ties with party chair Frank MacKay and his close relationship with Mayor Michael Bloomberg, an Independence ally and benefactor.

But in Como’s race, the line went to Addabbo.

“I was able to keep one of them off,” said Michael Zumbluskus, a downstate executive committee member who was upset with the campaigns’ use of rival signature gatherers, and claimed victory from keeping Como off the line.

Zumbluskus said that the decision was also helped by Addabbo’s campaign carrying petitions for Independence Party state committee members, while Como’s had not.

Como campaign spokesman James McClelland sought to downplay the development, which could make it difficult for Como to win in a Queens district with a heavy Democratic enrollment advantage. McClelland said that Como’s campaign met Sunday night after learning of the news and decided they still would be viable going forward.

“It’s not a blow to the campaign, because this year the anti-incumbent sentiment is so strong,” he said. “In the past, the Independence Party was more of an asset.”

Photo from the Daily News
Posted by Queens Crapper at 12:23 AM

PADAVAN IS USELESS AND AVELLA NEEDS TO LEARN TO MAKE FRIENDS IF HE WANTS TO GET ANYTHING DONE. HEY AT LEAST HE ISN'T AN ATTORNEY OR PRETEND TO BE A VETERAN.

Caveat---Avella is using the Parkside Group to run his campaign! 'Nuff said!

When Avella loses to Padavan, he'll probably have a job waiting for him with the Parkside Group who's currently running his campaign!

After posing as a "reformer" Avella is really just your average follow the leader clubhouse machine politician.