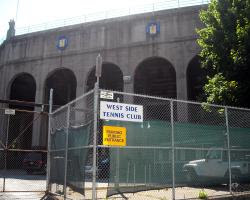 The days of the West Side Tennis Club Stadium at Forest Hills may be numbered. Members of the club are considering selling the historic venue to a housing developer for a sum of $8 to $10 million. The 14-acre property is surrounded by some of the most prestigious real estate in the borough and could be torn down to make way for future high-end residential housing.

All 825 members of the club are invited to an informational meeting on August 10 and those with voting rights are expected to vote on the fate of the century-old structure on August 19. The West Side Tennis Club Board of Directors requires a total vote of two-thirds in favor in order to move ahead with the project.

So far, only the acre of land covered by the stadium parcel has been chosen for possible development and it is unclear if a buyer has already been selected. The area has always been a prime location for development with the Long Island Rail Road station and Austin Street shopping area featuring numerous shops and restaurants nearby.
Posted by Queens Crapper at 12:41 AM

So why dont the locals landmark it.

James Van Westerling, front and center. Arn't you are a big supporter of the new borough historian?

Something to take up with the Queens Preservation Council.

It sounds like they're talking about 10 million for the 1 acre the stadium sits on, not the whole 14 acre club.

If this one acre in one of the choicest locations in Queens is only worth $10 million, then how can that run down lot in Maspeth where St Saviors one stood be worth all those millions they claim?

Ah. instead of sounding like a couple of real estate brokers should we not comment on the apparent lack of community pride here?

I mean, is this setting us up for another ad nausum shit 'they should have saved it' and 'its a shame they had to tear it down' and the usual crap everyone is always whining.

So community, where is your backbone?

typical queens. always finding justification to getting kicked in the ass.

Bring back the concerts, the locals loved the element it brought into the neighborhood! And, of course, free NYPD policing for these for-profit, private events!

They should make affordable housing for low income people with that property. A welfare hotel would be nice too. Some spice and color are needed in the area.

Welfare Hotel? Who the hell are you kidding? Do you really want to depress the real estate values of the surrounding houses that badly? We're talking on of the most prestigious areas of Queens and all of NYC.

A shitty condo will go up there instead - called the Tennis Club or something stupid.

It is crazy to destroy the history for a condo!
The Austin street and nearby neighborhood are already much crowed. The schools are over enrolled.
We have many ways to solve the financial problem. Selling to developer is not the only way.
Forest Hills Gardens is the few places with its own character in NYC. Please don’t destroy it.
Our children and grandchildren will blame us to turn a historical site to a condo.

The West Side Tennis Club does not acknowledge how iconic the Forest Hills Tennis Stadium is to the greater community (locally, nationally, internationally). This is one of the nation's greatest landmarks, and they should be open-minded and sell it to an organization that will reuse it in favor of the community. Read the posting on the Rego-Forest Preservation Council blog, which includes a letter campaign, memorabilia, status, the best reuse strategies, and commentary from the greater American public, which is whom the Stadium was conceived for. Play a role in its future. Not its potential demise. Time is of the essence!