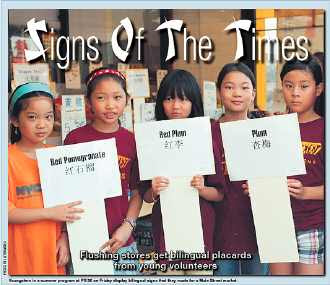 In Flushing this summer, it’s the children who are leading the way when it comes to increasing the number of English-language signage in downtown stores.

For years, non-Asian shoppers in Flushing have complained about the lack of English signs with names and prices of fruits and vegetables and other commodities sold on the bustling thoroughfares around Main Street. The city’s Department of Consumer Affairs has made forays into the community, issuing citations for the no-English signs, but the practice has continued and there are just too many stores to keep up with, according to the agency.

Enter Lois Lee, director of the Chinese American Planning Council School Aged Day Care Center at PS 20. With a large contingent of youngsters from elementary school age through high school, she has organized a five-week community service project to fix the signs.

Keeping English off signs merchandise, “discriminates against those who can’t read Chinese, like me,” Lee said. “I can speak in Chinese but I never learned the letters.”

Last week, groups of summer campers from Lee’s program visited merchants along Main Street explaining that they would make bilingual signs if the store owners agreed to post them. According to Lee, some said they would be happy to while others gave a decided no.

There was a wide variety of shops canvassed, including restaurants, fruit stores, herbal shops and pharmacies.

Youngsters spent the rest of the week painstakingly making 200 signs with Chinese symbols and the English translation. On Friday, they revisited the sites and helped erect the new signs.

Lisa, the store manager at New A & N Food Market at 41-79 Main St., was happy to help the campers match the new signs with the fruit. Youngsters held up their placards for peaches, dragon fruit, plums, melons and more.

Many of the kids said the project was fun and they learned that it was a city law that all signs must include English. They will return to the stores in five weeks to see how their initiative worked out.

Lee promised this week to do a similar undertaking with Korean merchants along Union Street. She was still looking for adult helpers who spoke Korean to help write the signs. 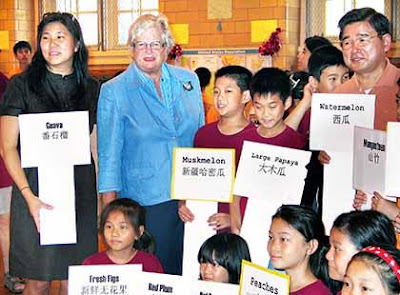 Who's that really ugly guy in the bright blue blazer?

Who's that really ugly guy in the bright blue blazer

It's Robin Williams from Mrs. Doubtfire.

(P.S. Toby can't figure out what kind of fruit she is.)

It would have more fun to give the kids enforcement powers to padlock the shops which did not put up English-language signs on their own.
Kid Power!

Shut the stores down and deport the owners.

This is a great idea for the kids and the community... better late than never, I guess. Too bad this wasn't done 10+ years ago, before the unsafe & divisive signage became completely out of control.

They already lost us "round eyes' "
business and we won't be coming back!

Not with the existing traffic congestion....which will be far worse when Muni Lot #1 gets replaced with Flushing Commons.

You Asiatics had better be able to support your own stores because we Non-Orientals are not going to be helping you out.

You can eat shit Toby!

From the looks of that faccia brutta
you already have!

We were told many years ago by CB# 7, etc. that insisting on English signs might "offend the Asians".

Things must be quite bad for Asian businesses these days if they are now willing to comply.

I guess they discovered they need the support of non-Asian shoppers.

The Taiwanese isolated themselves for years and snubbed the "old timers" and now you need our patronage?

I recommend BOYCOTTING all Asian businesses in the downtown area!

Harpoon her already and process her blubber!

It looks like Moby Stavisky...of the that same Stavisky political trash family...who spearheaded the move to brand then C.M. Julia Harrison as an "anti Asian" is now trying to steal the show by promoting Julia's original request...to have English translations on all signage.

Remember when Harrison introduced such a dual signage bill in the city council?

Whether these Oriental stores post English signage or not, at this late stage in the game, will make no difference!

Once you lose a large portion of your customer base it is almost impossible to regain it.

A prediction based on some hard facts:

You'll be seeing a lot of Flushing's Chinese businesses closing soon in this bad economy.

"Flushing Commons" will be the grave digger.

Not only will Korean business die but the Taiwanese will also be buried in the same dirt...eh Wellington?

But Mr. Chen needn't worry being far enough away living in the more quiet Little Neck!

He's made his money off of downtown Flushing and is now collecting more loot from Manhattan's Chinatown.

You'd better watch out for this slippery guy C.M. Margaret Chin before he destroys your district!

Looks like a lotta crap to me. Leave it to the Chinese to exploit child labor and make it look like something civic.

I enjoy sampling some eastern cuisine from time to time. The trick is to just get an Asian girlfriend. If you’re not very charming, you can always dial up one of those ads in the back of the Tribune. An evening in Flushing wouldn’t be complete without it.

I think this is a great idea. Man! people on this forum are angry and bitter. They finally put up some signs and now those demanding signs get put up are throwing childish tantrums by saying - it's too little, too late. How would those kids feel if they were to hear this mean spirited comments? Can we act like adults here? This place has turned into Chinatown. Accept it! If you really can't stand it, then don't go there, - like me - I try to avoid it at all cost. If you live there - maybe it's time to move. Sorry, but things don't always stay the same.

THOSE SIGNS SHOULD HAVE BEEN IN ENGLISH FROM THE START!!!!! And honestly I could care less about hurting their kids feelings "THE TRUTH IS THE TRUTH" Point Blank!!!!

I don't like it that's why I haven't shopped in that downtown dump for 15 years...you idiot!

I enjoy bypassing Main Street (looking down with disdain from above that LIRR stop) when I'm on my way to the city.

And I'm exceptionally pleased that I live far away in Broadway North's deed restricted section!

Just in case anyone is interested in buying my home...the asking price is 1.7 million dollars!

No low class Taiwanese in my nabe!

But don't hold your breath...I'm not selling.

When I want Chinese I go to Manhattan...a real architecturally interesting Chinatown not a festering boring sump like downtown Flooshing!

"A prediction based on some hard facts:

LOL. If you are talking about the little hangout booth shops you see in Manhattan's Chinatown or in the Flushing Mall, that I might agree with.

But I doubt this will be the case on Main Street. If a business fails, another one will prop up in its location just like Manhattan.

There are just too many Asian
Entrepreneurs..or mentality-wise. I have equally mix of friends of all races and the one thing that stands out from the Asian friends (note: I'm not a racist just by pointing out they are Asian or Caucasian or black) are that they are savers and they all have mentality of opening their own business or cost cuting and saving, compare to the other friends of different race and other 'ABCs' (American Born Chinese). My caucasian friends do talk about money and career too but not as crazy or money conscience as the Asians.

Glad to know that there are 10 year old children who are more mature than people acting big behind a computer screen. I want to see someone say all of these at a some sort of press conference, in front of their own mother... see what kind of reaction they would get. Too little too late? what have you done to say that? You only prove what the people of this country has belittled themselves to. Whine about something that's wrong, and proceed tell someone else to do it.