"Stephen Goldsmith wants to close more firehouses and lay off more firefighters. At a July 20, 2010 breakfast meeting, the new Deputy Mayor of New York City had to answer for his opinions about more FDNY cost-cutting.

Mr. Goldsmith said he believed that the city had to renegotiate collective bargaining agreements and challenge court orders that regulate the public safety in order to cut costs.

Mr. Goldsmith was appointed on April 30, 2010, to become deputy mayor by Mayor Michael Bloomberg. Under three consecutive terms of the Bloomberg administration, the city has closed firehouses all over the city. But as many as have already been shut down, it still isn't enough for the mayor or his new deputy mayor. They want to see more firemen leave the service, and they want to find ways to cut retirement benefits to our city's heroes." 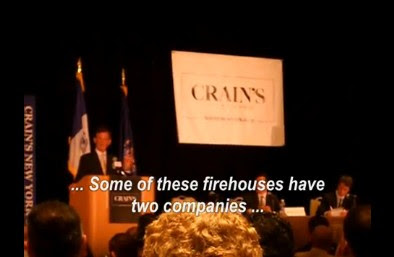 This boob does realize that 2 companies in the same house serve different functions, right?

Here's how this was reported in Crain's.
Posted by Queens Crapper at 1:57 AM

Then let the SOB close one next to where he lives!

Nope....most firehouse that have been discussed for closure are often located in working class nabes the city wants to hollow out.

"Burn baby, burn"!
Then the yuppies replace the poorer people of color who formerly lived there.

A form of urban renewal, no doubt, approved by the EDC!

If there is such a financial crisis, they could raise the city income tax a half a point, but Bloomberg won't do that, since his rich buddies would have to pay their fair share.

Instead he cuts services past the bone, jeaoprodizing health and safety, and raises sales tax, fees and fines, all of which disproportionately hit the poor and working people.

how does an 22.5% increase in property taxes since rino bloomberg's election help the rich and hurt the "poor welfare subprime loan gang",who do not pay anything?

Crain's New York hosted this breakfast but was very careful not to show video on their website like the one Queens Crap posted.

The topics: closing fire houses, anti-gay marriage? sure sounds like after a very long non-answer that he is, pro-stop and frisk although again it was a non-answer.
If you haven't check out my YouTube!
http://www.youtube.com/watch?v=rdLQNanbNhU

I walk up to Goldsmith before the function and ask him several questions including why higher a republican this late in the game unless it is yet another indicator Bloomberg still has his eye on The White House? When I ask Goldsmith about "infrastructure" as in NYC's is shot to hell and my concerns for the people of NYC he says "thank you" which I translate as "F-you, you are dismissed".


I made a playlist of YouTubes, one by me and several by my fellow activist and he uses subtitles on all his YouTubes. He is a hard core liberal but being tri-linguil at least he provides subtitles translating republican. All jokes aside Stephen Goldsmith is a disaster who can handle questions from 2 white male reporters and says he is an "operations guys" and he does not want to answer social political questions. Scary I know. He appears not to understand why the FDNY has 2 fire trucks in a firehouse. You see Deputy Goldsmith, one fire truck is an engine and one is ladder and you need both in case of a fire!!!!!! He will not last as long as Dollar Bill Dan Doctoroff. Go to my blog and under my search engine type Goldsmith and read my insights. I mention confronting Doctoroff about infrastructure concerns as well and that was before the steam pipe explosion that looked like a terror attack. Doctoroff did not brush me off with "thank yous". He had someone from DEP contact me and assure me all was ok. Than the Grand Central horrific steam pipe tragedy happened and shortly there after Doctoroff who once referred to himself as the Deputy of infrastructure left to return to king Mike's private empire. Goldsmith is shockingly inarticulate and a bumbler with words. Hard to believe he would be much better with "operations".