A street so nice they paved it twice! 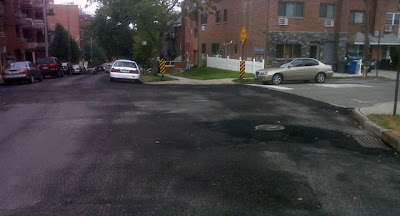 NEW YORK (1010 WINS) -- The city Department of Transportation has many residents scratching their heads in the Briarwood section of Queens.

Just weeks after applying fresh paint to the road at Coolidge Avenue and 138th Street residents say city workers tore up the same road and repaved it.

"It seems like they went backwards," one resident said.

Workers painted markings on three blocks which included bike routes, arrows, crosswalks and stop lines before tearing up the street.

The Department of Transportation says the markings will be replaced after the resurfacing project is complete. The department is still looking into the costs but say they are minimal and part of their general striping budget.

Residents fear the city is wasting their tax dollars.
Posted by Queens Crapper at 11:31 AM

At least they have a fully paved street. When the DoT redid the streets in middle village in 94/95...they paved the middle of our block(78st)and paved 1/4 of the way with the gutters. They said they ran out of asphalt and will be back the next day....they never came back. We complained to Dennis Gallagher and he said they must have run out of money for our part of middle village. I'm shit sure that the juniper park side of middle village didn't get this kinda treatment from the DoT.

This is why the city has no money. There is zero accountability within the city agencies and no one is held responsible. This city is in deep trouble. Watch the middle class head for the exits by moving to more tax-friendly states with a decent standard of living. New York is truly becoming a Third World City. It's just a shame.

Great report - I got my hands on a press release from an engineering group -- American Engineering Alliance, about how to pave the city streets from 2007 and when I get a chance I will retype and post on my blog.

The East Village, Lower East Side looks like a bomb

Here are a few sentences...
Why must New Yorkers put up with bad streets?

Driving through the streets of the City, one gets the impression that New York is one huge construction site. There is one type of construction activity on almost every other block. Contractors do not merely open up our roadways, and haphazardly put up barricades and divert traffic; they also use streets to store their construction equipment and materials.

Putting up with the inconvenience that construction activity creates would be tolerable if the public could be assured that the contractors or utility companies working in our streets aren not abusing the useable traveling space and will restore roadway to its original smooth condition. All continuos, inadequately controlled construction activity has resulted in a roadway system that is possibly the worst in the Country in terms of rideability. In fact, in some areas of the City, the roadways are worse than you would find than you would find in some poor, third world country.

(There is more but I will stop here. I am tired and hand typing, making phone calls, answering calls.)

Also note king Mike decided the commissioner of DOB should not be required to have an engineering degree or an architecture degree. Bloomberg is being sued on this and he won the first round but it is being appealed I believe. I guess the judge did not look over how many accidents, deaths and injuries happened under Bloomberg's tsunami of development.

I keep posting my own photos all around the Lower East Side of streets that looked like bombs went off.
Thanks Queens Crap.

Your blog Queens Crap is an Icon on my Iphone screen.

And run-down Queens Blvd has not been repaved in nearly 15 years!!!
What's going on DOT?????

Sounds like the park they are building where the old gas tanks were. That park looked beautiful, then they tore it up and are still presently working on it. I wonder who my tax dollars are paying off?

Someone should fire the two of them together. Or are they married to a Congressman or Senator or something like that? Could it be , just inept?

Gas Tank Park is being ripped up and re-done again - Why? not really sure. Just wait till all those bussed in high schools kids start using it for sex and drugs. Its going to be ruined in no time flat - that is if it ever gets done.

As far at DOT - wasting money - take a drive past the Dept in Maspeth. - They do nothing all day - but oogle the passing women and harrass the young girls who live on the block - leaving sexual notes on their cars.

FYI - I live on this street and it still looks like it does in the photo. It's been almost a week and no seen plans to pave the tore up street.