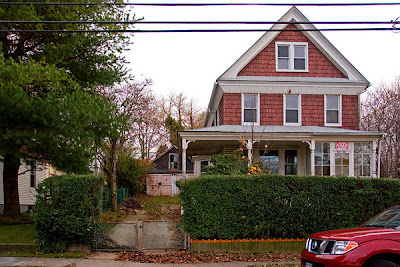 Back in 2008, we held a wake for the cemetery caretaker's house in Maspeth.

But later that year, there were signs of hope.

Well call the gravediggers, because this one's a goner. Lot subdivided and house on the way to its maker. 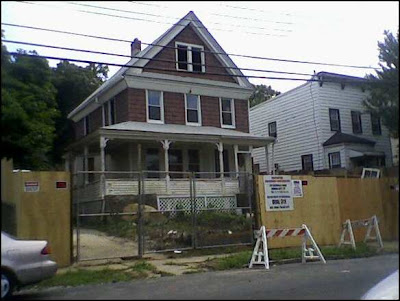 This is what happens when you do a half-assed rezoning and skip blocks containing one-family detached residences, some of them Victorian. Sadly, this sits across the street from the Methodist Church that burned down last year. Since that congregation recently merged with Glendale UMC, it's likely that Queens Crap will be built on that site as well. This used to be one of the most beautiful blocks in the area, but now it's all turning to crap.
Posted by Queens Crapper at 12:00 AM

This the same building where the new owner hung an Irish flag out the attic window.
Shame how these foreigner come here and piss all over our heritage.

This the same building where the new owner hung an Irish flag out the attic window.
Shame how these foreigner come here and piss all over our heritage.
----------------------------------
It will stop, once all these beautiful one-family homes, which used to define Queens, are destrtoyed by the city and its cronies, and there isn't one square inch left in this dying borough to overdevelop.

No, the problem is the preservation community: we need to organize and those areas designate need to get in their thick skulls they need to help, too.

We need QCC to get off their ass and stop issuing thick reports that nobody reads and start to vigorous program of public education.