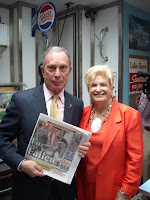 Bloomberg is the one with endorsements from 61 papers - not just the three major dailies, but also dozens of tiny neighborhood weeklies that thrived on Bloomberg advertising dollars.

"A representative of Mayor Bloomberg called me, and he made it very clear to me that I know how it's done. And I had to join the program, and the earlier I endorsed him, the more money I'd get," said Jerry Lippman, publisher of the Manhattan Jewish Sentinel and the Long Island Jewish World.

His papers endorsed Thompson, all 30,000 weekly copies of them.

And now we know why Vicky couldn't wait to hop on board the Bloomberg express and also why the Queens Chronicle was so sensitive about being called on it.

Well, the cat's out of the bag now, even though we all knew it was in there to begin with.
Posted by Queens Crapper at 9:28 AM

Isn't this also the same paper that crowned Joel Klein, the worst school's chancellor this city has ever seen, "Man of the Year"?

Hey listen, the Bloomberg bux will bankroll Vicki and Stu's next vacation. You gal staffers at the Courier, don't you love it that Vicki gets her fingernails manicured in a foreign luxury spa while you break yours on the computer keyboard, day in day out, week in week out, month in month out?

"Stuey, dahling, where do we fly to next?"

So sickened by Bloomberg's dirty campaign dealings.
Today The NYPost is trying to paint Thompson as an anti-semite. I don't buy it and I am voting for Bill Thompson tomorrow. I asked the post if Wolfson helped write the article along with Haberman and Goldenberger.

I sent this to the press:
http://www.youtube.com/watch?v=jf1918vKRT4Mike Bloomberg's campaign people are so tacky and competitive they put a flyer on the van that has my posters like a parking ticket which is emblematic of the Bloomberg' administrations way to raise money...ticket the middle class and small businesses like there is no tomorrow.

Why do I care so much? Find out in my newest YouTube and you will see the portrait of Mike Bloomberg has taken a Dorian Grey turn looking hideous and horrifying.....http://www.youtube.com/watch?v=FdDSwETpyLc

These newspapers provide a valuable service. They make great liners for my bird cage. My birds to the papers what they do to us!

This exposes our leadership as in if for the money - they dont even try anymore for justification.

Ah ha! But now we have blogs and can compare notes. It might take a number of years, but the days of their antics are numbered.

Who said this new Kosher nostra and there dream of a "New City" of dumb sheep with no middle class, checks and balances doesnt exsist.

Bloombergs friends own all the newspapers and have lion share's of influence in TV and internet media.
Doesnt Murdoch own most of those Queens newspapers ?

They are all edited, censored and layed out under one roof in Brooklyn.

Wow, he has so much money he can even buy the media. This man is dangerous. He needs to be stopped. If he was so confident in his accomplishments, he wouldn't need to spend millions trying to convince people of what a good job he did. Vote for Thompson. It's time for new ideas. Give someone else a chance.

Another way of cooking the books

All these local newspapers showed exactly where they're at, in the pocket of the highest bidder. A pox on all of them. A pox also on the Bishop of Brooklyn. The so-called Catholic Citizens Committee mailer in some Council races is despicable. HEY- BISHOP- MY MONEY IS NOT COMING TO YOUR DIOCESE EVER AGAIN. I'm voting DEM down the line for the first time in decades.

Gary the Agnostic said...
Another way of cooking the books

What more do you need to know about the Commissar?

The NYC media has been lying on command of the Commissar class for the last eight years at least.

They are willing liars for him. The money is just icing on the cake.

Are you going to allow the Commissar to continue to shit all over you and your family?

Show some pride in yourself.

It is possible to rid ourselves of this turtle-faced lying freak!

Just vote him out on Tuesday! Thompson is no big improvement. But, we can get rid of him soon enough.

It is an established custom in my profession not to endorse a candidate until a week before the election. This custom gives newspapers the appearance of impartiality.

Bloomberg broke this taboo with his big, fat wallet. By Labor Day, all but a tiny handful of community newspapers held out.

The way-too-early summer endorsements greatly impacted the reputation of journalism as being impartial and balanced.

Ms. Rhoades, Ms. Schneps, Mr. Schenkler- Was it worth it?

I hope that this never happens again.

It's all about the money and who can be bought. What a sad state of affairs in this day and age when elections can be bought and sold to the highest bidder. All I know is that I can't be bought and all the money in the world won't make me vote for Bloomburg. I'll take my chances with Thompson.