Artist arrested without cause on the High Line 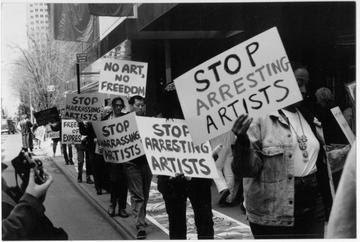 Robert Lederman, president of the street artists rights group A.R.T.I.S.T. (Artists Response To Illegal State Tactics) was arrested on the 14th Street section of the Highline Park on Saturday, at approximately 3:30 PM. Lederman was issued 5 summonses, handcuffed and taken to the 6th Precinct by PEP (Park Enforcement Patrol) officers, after employees of the Highline Park called police. This is Lederman's 42nd arrest.

Lederman was on the Highline displaying and selling original fine art prints of his NYC scenes. Between 1994 and 2001 Lederman won 5 Federal lawsuits on street artists First Amendment rights. Among them was a 2001 Federal Appeals court ruling (Lederman et al v Giuliani), which established that visual artists can sell in any NYC park without a license or Parks permit, based on First Amendment freedom of speech.

Lederman was released from the 6th Precinct around 6:30 PM and made the following statement:

"The Parks Department has done a very poor job of educating their employees about the legal issues involving First Amendment rights, artists and parks. Before any of these summonses were issued or any arrest was made I repeatedly explained to Highline employees and PEP officers that a court order was in effect and that artists freely and legally sold in all NYC Parks without a license or permit. I also showed them articles from the NY Times and NY Post describing this exact court order.

The wealthy people who paid to create the Highline seem to have forgotten that it is still a public park. The US Constitution remains in effect there, as do the street artists rights described in numerous 2nd circuit Federal Court orders. These court orders are constantly being violated by the Parks Department. This is a blatant example of contempt of court, false arrest and chilling of free speech in the name of privatization."

What is it about the US Constitution, court decisions and court orders (or binding referendum votes) that the Commissar fails to understand?

Oh, he understands, all right.

But this Commissar doesn't TAKE orders - even from federal courts, or from the electorate.

He gives orders, and expects us to cravenly obey.

Robert Lederman needs to have his attorney now get a federal court to issue another court order - directly on the Commissar.

Next arrest, have this arrogant freak hauled into court on a contempt citation.

This will have to substitute for the spanking his mother never gave him.

Constitution? That THING is still in effect?

Parks belong to artists for rich folks amusement and we must pay for this previlege. The city should sell the highline Park to get back the money it paid and must maintain annually - to the adjacent property owners. The proceeds should go to build real parks for real folks everywhere else.

Dont feel sorry for them at all. The artists are in important part of our community that can take their talents and use if for change - just as they did DECADES ago.

When it comes to housing and rights and unstainable developments they are MIA.

They could have flooded the city with anti-Bloomberg posters - just think of what 3 Suzanna Troys could have done.

Dont feel sorry at all cause they, like the rest of us, now have this SOB around for another 4 years.

Missing Foundation is right. We laid down and took it like the disaffected jerks we are. Blogging is only the beginning but is most definitely not the end.

New York has always been a place for crooks, hustlers, and thieves. But maybe one day the sons and daughters of those crooks, hustlers and thieves will look upon their parents mistakes and change the world instead of being absorbed by it. Take there old tactics and use it against them without becoming the evil that we fight. It's a tough choice, but one worth making.


You're missing more than your foundation - you're missing the facts! Republican scum? Are you blindfolded? The democrats have a majority in the Senate, Assembly, have and will have the Governor's office for the foreseeable future and hold most of the Judiciary in NYC and on LI, and in Albany. Do you still believe that the Reps have any control in this city? OH and the White House! Get over it! Dems suck too!

Lederman doesn't engage in "art". He engages in "propaganda". Call the spade a spade.

Except that he's not, and never really was. If that's what Missing Foundation meant, then he should have said, "that 'Republican' scum."

So anybody should be allowed to set up a business in a public park and sell stuff? I don't think so. Democrat bleeding hearts = zero quality of life.

Not Democrat bleeding hearts. It was a court case. The guy won. Don't like it? Change the constitution.


And then he acts like a Democrat when he raises taxes and goes to bed with corrupt builders? Please - it's a lame argument. Bloomberg may not be a Democrat, but he sure ain't no Republican. Scumbag? On that we agree.

Maybe he sells better art at more reasonable prices than those overpriced artsy/farsy faggot owned Chelsea art galleries and they hate the competition!

Hey...you pansies wanted the High Line Park...now you pay for its expensive upkeep!

Those artists are simply peddling their works. Period. Free speech my heinie.

Then real crime here is that they have the "Park Police" here for such a stupid 'criminal' act yet in outer borough parks where real crimes are being committed, there's no parks or real police to be found

Good point, but when the voters in Queens, if there is a problem, ask did you get in touch with the councilman?

The people in Manhattan say why wasnt my councilman doing something about it?

"Lederman was on the Highline displaying and selling original fine art prints of his NYC scenes."

How are original fine art prints of his NYC scenes propaganda?

OK, he was "peddling" them.

This is the Age of Regan and a time where the old party hacks like Gery and Claire and Vicki and Peter abandond a Democratic nominee (and person of color) for a Republcan plutocrat who ignores the electorate in favor of development.

Thanks Queens Crapper for posting the link to the Court rulings. It was educational in elucidating the issues.

I fully support of our First Amendment rights. However, I find it difficult to stomach the idea of those that ride its coattails for pure peddling purposes. And I may go so far as to question its legality under current city ordinances. While I agree artists' works fall under the category of materials protected under the First Amendment, regardless if monetary transactions for such works are made, I still hold objections to this issue having relevancy to free speech on the grounds of artist intent.

It's clear to me the artists intent is to sell their works rather than exercise their right to free speech. My position isn't based on some stereotype or a disdain for current artist ideology represented in their works, but from years of interacting with such artists in an academic atmosphere where they are born. It's well known among them that their works have a higher probability to sell in such parks where potential clients (read people with higher discretionary spending) frequent. And so their intent is to peddle at such targeted parks. I feel the issue isn't really about free speech at all, but more so about artists' capitalistic desires and quality of life issues in the city.

Klink said:
" ... I feel the issue isn't really about free speech at all, but more so about artists' capitalistic desires and quality of life issues in the city."

Capitalist desires and intent have zero to do with whether we can exercise our First Amendment rights.

The First Amendment contains no clauses to exempt certain desires or intents from the protection.

Further, the First Amendment is a limitation on Government, not on the individual citizen.

What is it about capitalism that you detest, Klink? Are artists now required to DONATE their possessions to any who ask?