Where did the stimulus dough go? 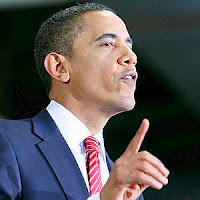 So many billions out the door — and nary a clue about what Americans got in return.

That’s the tragic-but-too-true story of last February’s $787 billion federal stimulus program — the first major legislative package out of Washington after the Democrats took control of the city.

What a monumental waste.

The truth? No one really knows if the package “created or saved” any jobs.

And that’s now crystal clear, after reporters checked out the Obama team’s claims.

ABC News, for example, reported last week that many of the supposedly saved or created jobs were located in congressional districts that, well . . . don’t exist.

And no one (yet, anyway) is saying the money went south; surely someone will one day figure out what happened to more than three-quarters of a trillion dollars in taxpayer cash.
Posted by Queens Crapper at 1:04 AM

I had my tailor make my pockets twice as large. When they are full, do they make my ass look fat?

1. The Chinese gave us cash so we would buy their goods.

2. We spend the money not on pumping up the consumer, or even infrastruture, but on development and construction

3. Chinese goods sat on the docks, and finally were sold to Chinese consumer, sparking a domestic boom.

4. Chinese realize that they are stuck with worthless paper that will be inflated to half its value.

5. Chinese are now trying to ditch US dollar.

did no Glenn Beck expose Van jones,cpusa...anita dunne,maoist etc.etc.? have they not left the Obama administration ?

I don't know? Earlier this year I was scared out of my pants. Now I feel better being a small business owner. If they can lighten my health care costs I'll be delighted!

The naysayers are probably all Rebublicans without a clue.

Let's all say it: ACORN!

No, Lets all say it--Glass Steagall. Back in the days of the Pecorra Commission, our grandparents dealt with "too big to fail," by making sure that no one was too big to fail.

Yes, like Taxpayer, I have no patience for poverty pimps or people who put political correctness over sound lending practices and the responsibilities of fiduciaries.

But after 9/11 a cornucopia of capital was dumped into the markets to bring us out of the last tailspin and no one kept an eye out on how the money was spent.

Now we are dumping money into the economy with a firehose to ward off another Depression, but if we don't use the time we bought productively, we are only buying a worse disaster in the future.

Follow the money: more than half, perhaps 65 percent of "stimulus" went to unionized government employees - mostly teachers, and less to bureaucrats, police, etc., some to favored government contractors. A lot was wasted, none of it created permanent private sector jobs.

Don't you hear that loud sucking sound in Chicago? WHere is Ross Perot when we need him to call this out?

The NY Post and Fox news is not the place to get the real facts. Under President Obama so far a little over 2 Billion has been granted. A tiny sum compared to the 11 Trillion the last President handed out no strings attached. And now the Republicans are the so called champions of fiscal responsibility. Where in 'opposite world'?

Well, everyone wanted change. Be careful what you wish for. Oh, by the way, the stimulus money is our money and we'll be paying for this administration's mistakes for many years to come.

Well, everyone wanted change. Be careful what you wish for.

And so we got the change...while they steal the bills!

Enthrone a media created fraud and this is what you get.

Whaddya expect from this dope Obama? You call him smart? He's dumber than Bush. Bowing down before the Japanese Emperor. The President of the United States kowtowing to royalty? Obama hasn't even heard of the American Revolution. Jerk.

re:lino,the liberal(guilty of omission?)
why did you not tell the Q.C. jury about the
marxist/maoist philosophy of white house advisor's,
a.dunne and van jones .

liberals lie and never admit it when exposed.

acorns federal money has been cut off by the congress. tell us why ,lino,the demonizer.

give us your rational argument? i do not think you have any.

Let's be thankful that Obama will be only a one term president...ONE TERM TOO LONG though!

I can see the headline after his second term defeat:

Te next time anybody promises you "CHANGE" be sure you'll be getting the same old jalopy with a cheap paint job!

Make a fast turn around the corner and the engine drops out like in a "Keystone Cops" comedy.

Yeah, you're right. We should keep things the way it was. Millions of Americans uninsured. That's the way you like it, right? As long as you're covered, all is well with the world. Selfish.

Why would we take on the burden of paying for other people's health care? Most of the health care problems people have are brought on by their own behavior. Why should I pay for someone's emphysema treatments because they decided to smoke despite decades of warnings? The federal government already mandates care in an emergency.

How about the millions of illegals that will get amnesty and then become our responsibility to care for?

Anonymous said...
This comment has been removed by the author.
Monday, November 23, 2009

So because someone smoked, they deserve to die?? That's so cruel! Many smokers started smoking back in the day when no one knew the harmful side effects.

As far as illegals, NO I don't think they should get free health care. BUT these people are HERE. That's the reality. And Guess what? We're paying for these people's hospital visits already even if it is indirectly. And in many cases the government has encouraged these illegals to come here. So what do we do? Let people die in the street? I don't like having to give up any health care coverage either, but the health are system the way it is, is not working. We're paying higher premiums every year for less and less coverage.
Something has to change! The problem is people HATE change, especially when it involves helping out the poor.

georgetheatheist said...
"Whaddya expect from this dope Obama? You call him smart? He's dumber than Bush. Bowing down before the Japanese Emperor. The President of the United States kowtowing to royalty? Obama hasn't even heard of the American Revolution. Jerk."

George, what's even worse, is that the current Japanese emperor that this jerk imbecile bowed to is the son of the emperor who helped plan the attack on Pearl Harbor.

This moron really shows how intelligent he is with this bow.

But, even worse, he bowed to the Saudi King. This blithering idiot bows to the man whose ancestors (just a very few generations ago) captured and sold the moron's ancestors into slavery.

The stupid narcissist's own half brother, an Arab Muslim, sneers at blacks, calling them pug-nosed slaves. By the way, the half-brother doesn't refer to blacks as African Americans. They are, indeed, African, living in Africa.

So, the half-brother is at least a little smarter than the other half.

And we put the moron in control of our military and trillions of our tax dollars.

So, who is really all that stupid?

Most of stimulus is being held for use right around the time Obama will be running for election.

the" new"marxist word to "demonize " an opponent ,who does not want to share their assets with the freeloaders is "SELFISH".

it is no longer shoes.
it is sneakers,as in multi-million dollar basketball contracts that the American athletes have earned. they do not appear to have any masters.

they are being very quiet as of now.

but i see that the Obama White House appears to have made "saturday night live" somewhat doubtful
about this administrations first year in leadership ?

to be continued.we will keep you "POST"-ed.

This new smoke and mirrors health care "overhaul" isn't the real deal we all hoped for...just a baby step forward.

It's riddled with loop holes that will benefit the pharmaceutical/medical/insurance complex.

You just wait and see.

Obama hasn't delivered much on his glittering campaign promises yet!

His new and improved government?
The Pope's nose!

Still I prefer him to the George Walker Bush league jerk off we had!