NY State almost out of cash 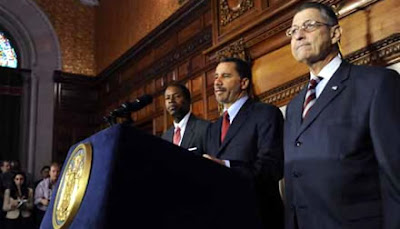 New York State is running out of cash.

Without a budget deal, New York will be left with just $36 million in the bank by the end of December, according to current projections. And the money will last that long, officials say, only if the state chooses to fully exhaust its emergency reserves by tapping several billion dollars’ worth of temporary loans from its rainy-day fund and short-term investments.

For weeks, Gov. David A. Paterson has invoked the shrinking amount of available cash in an effort to provoke the Legislature to deal with the state’s $3.2 billion budget deficit. So far, the specter of such dire fiscal outcomes has been greeted with what amount to legislative shrugs, chiefly in the recalcitrant State Senate.

The stalemate in Albany is familiar, of course, and there are many lawmakers and experts who predict that the Legislature will act at the 11th hour, as it has before, to avoid the worst damage.

But with no end in sight to the negotiations, state officials are beginning to reckon with what could be an unprecedented cash crisis. And many say that even if the current deficit is closed, the state is at considerable risk going forward — less able, for instance, to borrow money because of worsening credit ratings and ill prepared for far more severe deficits ahead.
Posted by Queens Crapper at 1:48 AM

the estimated annual fraud in Medicare and Medicaid (welfare) is $100 BILLION.

additional Medicaid (welfare) mandates placed on the states is $ 25 Billion.

the U.S.A. is going to go bankrupt if the Obama healthcare law is implemented.that will cost $2.5 TRILLION for full implementation.
the U.S. national debt is now $12 TRILLION.

They used to call them " carpetbaggers".

A Northerner who went to the South after the Civil War and became active in Republican politics, esp. so as to PROFITEER from the unsettled social and political conditions of the area during Reconstruction.

Profiteer is the word I want to concentrate on. The politicians of today see their service to the American people as a chance to get rich, hire all their friends and relatives and screw the public.

We do need change. I hope the change comes before we have another "American revolution".

Look at the picture of the 3 indivuals most responsible for gridlock in government, spending our money with nothing show for it except it being squandered and selfishness.

No surprise, as Queens Crap, as opposed the gutless Queens weeklies and NY dailies, routinely said this during the election (you can do this you know, if you dont waste time breathlessly following the mayor and the machine hacks)

Does this mean that development will stop.

No, schools may close, hospitals shut down, sanitation-fire-police cut back, but development will continue unabated.

That is until you wake up people, but, unlike the rest of the world where, for example Greens are really Greens and not a circus like Rev Billy, it looks like you need a few more footmarks from the developers and pols over your back before your stir.

How can we raise cash, let me see. How about instead of taxing our homes and raising our water bills, we collect on all the lawbreakers; you know people like Charlie Rangel, who don't pay their taxes. Maybe we can fine all the landlords with illegal apartments or actually enforce cellphone while driving laws and make people pay those fines. Some how it's the responsible citizens who keep getting screwed.

where is anything written about Park money?

did I miss something?

You missed it because I deleted it.

Be prepared. To protect yourself from the marauding human garbage and vermin that will be rioting when the State goes bankrupt.

how come Dominicans get every known government benefit? they are not American citizens.

take all immigrants off any NY state government benefit now, including their children and old people, send them back to their countries of origin.
get then out of NYCHA projects.