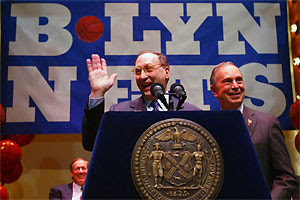 In a decision (PDF) that gives the crucial--but perhaps not final--boost to the Atlantic Yards project, the state's highest court, the Court of Appeals, approved the use of eminent domain by a 6-1 margin, saying that it's not the role of the courts to intervene in agency decisions, given the wide latitude in state law.

Project backers had long expressed confidence about the result, given the state court's general deference to agency decisionmaking, but the court's willingness to accept the case in the first place--the Appellate Division had unanimously upheld the Empire State Development Corporation (ESDC) in the first round--had left some room for ambiguity.

Moreover, two of the seven judges seemed quite skeptical of the ESDC, though the attorney for the nine petitioners faced similar skepticism. One of those judges, Robert Smith, filed a blistering dissent that stated:

[T]he majority is much too deferential to the self-serving determination by Empire State Development Corporation (ESDC) that petitioners live in a "blighted" area, and are accordingly subject to having their homes seized and turned over to a private developer.

...It is clear to me from the record that the elimination of blight, in the sense of substandard and unsanitary conditions that present a danger to public safety, was never the bona fide purpose of the development at issue in this case.
Posted by Queens Crapper at 9:45 AM

what a pity. I guess then when people stop leaving the court won't get involved in that either.

All judges in New York State are hereby to be known as Enablers. If you feel that you have been treated fairly by the court system, then we are not doing our jobs right.
Thank you and please return to your daily complaining.

At what point did justice become just us?

I'm gonna boil one more head of cabbage for lunch before they tear my blighted house down. [Sigh.]

What is needed is a pro-public lobby of communities just as organized as the developers.

They would not dare do this if that was in existance. As I have mentioned time and again, working within the current system is a big waste of time.

How do we go about this?

What a sad day for all landowners! No one is safe... If Bloomberg wants your land, he will just take it!

This is what happens when your country turns to Socialism. First the government takes your land if they want it, then they take over health care and limit the amount of money and rights that you think you have. The government will take care of us -- and not in a good way.

Nobody is gonna go see the nets in bklyn.The local yuppies and libs are not .the local blacks don't have the cash.............and the nets suck.This is the knicks city.

Wonder how much money Bloomburg paid the judge for this decision.

Sorry, no such thing as the FBI in the state of New York. Maybe someone paid them off too.

And your point being, aside from exposing your hatred of Jews?

This "decision" just proves that, like the US Supreme Court, judges are just as corrupt as the thieving Commissar.

This is just a move to move the "Negroes" out of the nabe.

No wonder African Americans dislike Jews so much (and vice versa)!

Time for a second American revolution!

You "tea baggers" better grab your muskets and dust 'em off!

No go and report this to the B'nai Brith!

The Nets are 14 game losers already, do we need another losing sports team. At least we have the yankees, but what the f... with the rangers, mets, knicks?

If properties continue to be seized under this perverted use of eminent domain, soon no one will want to purchase a home. We'll turn into a nation of renters and drive down property values. What will Bloomy and his friends do when there is no profit left in real estate?

So all greedy landlord/owners are Jewish?