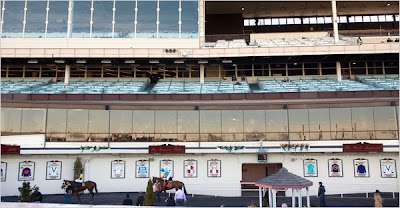 ...eight years and one recession later, state officials still cannot agree on an operator for the aging track, despite the obvious financial incentive: a refurbished operation with video gambling machines would generate more than $1 million a day, many experts say.

The latest round of talks has been stalled for months, and despite a series of meetings among Gov. David A. Paterson and legislative leaders to try to resolve the matter, they remain deadlocked. The pressure is on state lawmakers, who have already included a $200 million upfront payment from the winning bidder in their plan to reduce a multibillion-dollar budget deficit.

The problem is that the governor and the leaders of the Assembly and the Senate must agree on the winning bid.

The Senate, which would have to approve the selection, has expressed enthusiasm for Aqueduct Entertainment Group, even though some advisers say it is one of the weaker of the six bidders. The Assembly, in turn, has not shown a preference, although Speaker Sheldon Silver is thought to favor Delaware North or SL Green.

Given the history of tortuous and interminable negotiations over selecting an operator — symbolizing the worst of Albany’s dysfunction and backroom political horse trading — no one is expecting a quick compromise.
Posted by Queens Crapper at 1:47 AM

There should be federal oversight of Albany Pols - this is just incredible break-down and inept managing State government. Gov. Patterson is the most incompetent Gov. in America - we must call for him to resign. Disgraced former Gov Spitzer knew he was worthless except for the votes from Harlem. I feel sorry for Harlem folks who have been burden with their representation that has served them so poorly.

Perhaps many of us fear that if the horses are chased out of Aqueduct, residential developers will swoop in, and build over one of our borough's last undeveloped spaces.

But with thoroughbred racing in a decades-long decline, do our leaders honestly believe that a casino will save the sport?

If our borough's horse racing tradition is to be saved, there needs to be more community participation. If the horses were owned by local individuals or groups, Queens residents would be more inclined to attend and bet on their neighbors' horses. If there were programs for local children- such as a horse riding academy or a school for jockeys, the Aqueduct would be seen as an integral part of the neighborhood.

But if horse racing is doomed to extinction, let's consider the demographics. Southern Queens has a growing South Asian community, so perhaps Aqueduct's horses can be rehired for polo matches, with the center of the racing oval used for professional cricket.

But if our borough is not yet ready for polo, maybe we can lure back the Jets football team with a new home next to an airport. The oval field shape is already there, namesake jet noise being complimentary.

Queens can also compete with Coney Island's dry amusement rides with a water park. In a sense of historical irony, it would fit in perfectly with the Aqueduct's name. It would also divert swimmers from the crowded and aging public swimming pools in the area.

But if we do live to see a "racino" at Aqueduct, it will take more than a television ad with a talking horse (see Yonkers Raceway) to get me to the slots.

What a pack of bozos. Paterson picks up where Spitzer left off who picked up where Pataki left off. Do we see a pattern here? Every little harness track across the state has managed to get their racinos up and running and the state cannot. Could it be that the others are PRIVATELY owned? Hmmm? Or could they be trying to fix things so Malcolm has a golden parachute after bungling the Senate? This is government incompetence at its worse. We cannot even blame NYRA for this. What a sorry state of affairs. For shame.

Why no decision on VLT's at Aqueduct?

The rumor swirling around Albany today is that the Aqueduct VLT decision is being held up by Sheldon Silver and not Governor Paterson.

Seems like Governor Paterson was telling the truth when he told Queens residents that he was waiting for agreement on a decision from Silver and Sampson.

Clearly Silver choose Delaware North (Pat Lynch's client) last year when it was obvious to everyone at the time that they could never pay the $370 million up-front payment. Audrey Pheffer and Community Board 10 were shocked by this choice at the time.

This decision cost the State hundreds of millions of dollars in lost tax payments. Surprisingly, Delaware North has been allowed to re-bid. Instead, they should be sued for the lost revenue to the State. Andrew Cuomo, I hope your office is looking into this travesty.

So, what is Sheldon Silver up to?

Surely it is time for the independent Feds who prosecuted Joe Bruno to ask why Silver is holding up the Aqueduct decision and hundreds of millions of dollars in payments to the State not to mention the payments to NYRA, purses and the breeding fund in this state. After all the Feds prosecuted Bruno for payments of only $3 million over 15 years.

Audrey Pheffer and Senator Addabbo, it is time for you guys to wake up(after 8 years of inaction it should be obvious to you) and realize that Silver is taking you for a ride and this ride will result in the closure of Aqueduct as a racetrack and turned into at best a parking lot for JFK, not to mention affordable housing units.

Pheffer & Addabbo (remember 'Dumb and Dumber'), how will you explain this to your voters as they are traveling out of your district to the new up-market casino at Belmont.

Can we say welcome to:
"Wynn's Hotel and Casino at the Shinnecock's Belmont"