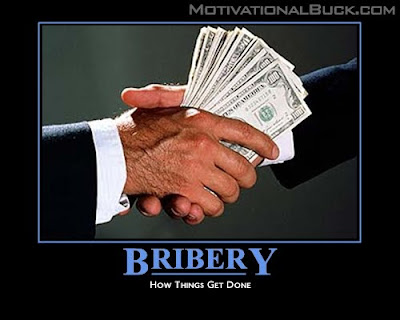 TRENTON, N.J. (AP/ 1010 WINS) -- A New Jersey man who paid a municipal official $5,000 to get approval for an illegal apartment in a building he owned has been convicted of bribery.

A federal jury deliberated for about two hours Friday before convicting 49-year-old Herman Friedman. The Union City man faces up to 10 years in prison and a $250,000 fine when he's sentenced March 3, although the actual sentence is likely to be less under federal sentencing guidelines.

Prosecutors said the apartment in the West New York building was discovered during a routine inspection in March 2007.

Friedman paid the money to the construction code official during a meeting at the official's office that was recorded by the FBI. The official also testified against Friedman.

Funny, how this happens ALWAYS in Jersey and NEVER in New York.

Who is getting paid off? If is is so preservasive, SOMEONE should catch it, right?

I mean, is this not the media capital of the world? heh heh