Developing every open space in existence 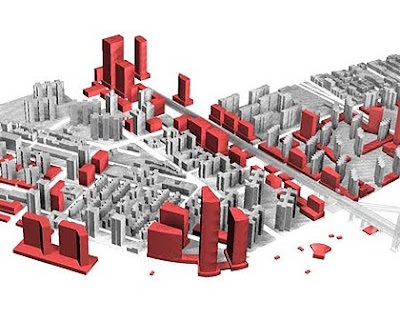 What should New York City do with its public housing? Demolish it, as public housing authorities in cities like Newark, Chicago and Detroit have done? Sell it, as private-market advocates propose? Or watch it continue to deteriorate as the New York City Housing Authority (NYCHA) struggles with deficits brought by cutbacks in state and federal support?

These are critical questions for the city because with nearly 180,000 apartments spread over five boroughs, NYCHA is New York's largest landlord. And in a city where housing for low- and moderate-income people is so desperately needed, public housing provides a vital service. Even if the buildings are getting old. Even if the elevators don't always work. Even if the vast superblocks typical of most housing projects are banal in design, barren of amenity and often empty and intimidating at night.

This year, an international team of graduate students from the University of Michigan Master of Urban Design Program spent a semester exploring the redevelopment potential of public housing projects on the Lower East Side, one of the greatest concentrations of such projects in the country.

They proposed that the projects' open spaces (more than 80 percent of their land area) be used for development that 1) retains all public housing in the area; 2) provides new revenue streams for NYCHA that can be used to maintain and enhance its housing stock; 3) creates the kind of economically integrated communities preferred by the federal Department of Housing and Urban Development in its public-housing demolition and replacement program, HOPE VI; and 4) uses development to increase project residents' social and economic opportunities.

Okay...sewers, parks, schools, electricity, police...where are we building those? Do these things not matter?
Posted by Queens Crapper at 1:15 AM

Tear them down,period.you pass these "devolopments" and you see $45,ooo cars and suv's parked there Total scam.These mutts pass these down like estates from one useless generation to another.Okay,now the bleeding heart lib response..........

Tear down these horrible obsolete mistakes. No one has a right to live in Manhattan

Leave it to inexperienced graduate students from Michigan on a zealot's mission to destroy any open space left in NYC.

The decay of Detroit is spreading throughout their own state and they are jealous of NYC....as most other failing municipalities are.

So these wannabee "urban planners" want to see us built to the max and choking on the overflow of our own shit from overburdened sewer systems?

Take your "international" team of graduate students back to your own countries and screw them up!

Flush your "precious" thoughts about improving NYC down the crapper with your next dump!

We've got a few of our own home "urban planners" too....who think they know what's best for all.

Actually, that doesn't work for me.

The problem here dear people is no one that can stop this will stop it.

We do not have a true grass roots community lobby in this city.

Pratt and the like talk about how to shoehorn more development, and the alphabet soup of community groups, from MAS to HDC to our local QCC do not forcefully come out against it.

The news? Forgetaboutit! They make money off this.

The Left and Greens? I have two words to describe thier sorry assed state: Rev Billy.

It is pretty frustrating being in a city that is the Capital of the World, with all this media and creditivity, and watching everyone sit mute as our city self-destructs around us.

The problem is us, dear people.

Despite problems and challenges, New York City Housing Authority developments are an enormous resource for our City and represent a time when we actually made a commitment to affordable housing for working and poor New Yorkers, rather than developing every open space or tearing down every existing building and remaking it for the wealthy. Planned development of unused NYCHA space might make sense if it leads to more affordable housing. The potential problem with the plan discussed here is that it more likely will lead to increased unaffordable development or upscale commercial development as a means to "pay for" NYCHA's operations. HUD has systematically starved NYCHA of operating funds for the past decade and both the state and city have failed in funding the operation of developments produced with state and city funds. A recommitment by all levels of government to the preservation of existing affordable housing - and, dare we ask, the production of new units is apparently too much to hope for.

If you don't like my development plans then leave. So long, suckers!!!!!

In my back yard (that currently is owned by me) there are a bunch of planters that are now without plants because winter's coming.

Perhaps the compassionate developers will want this empty "land" for some development.

Put them all side by side and they all add up to a lot of unused land.

This idea did not work out for Chicago at all turning some projects into luxury condos and then spreading gangs from those previous places throughout different areas of the city just made the problem bigger with crime.

First people are marginalized for years in bad housing with no real jobs etc for many so sure crime will flourish in these areas and then people who want a better chance get that but people with bad behaviour from that environment spread that to places they are "relocated" to.

I wouldn't get too upset by anything written by City Limits.

a little rag that touts the party line, no genuine reporting