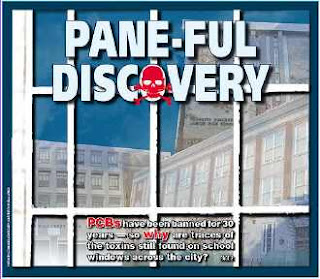 ...Naomi Gonzalez, a Bronx mother of two, has instilled in her 7-year-old daughter advice that may seem unorthodox at first.

“I don’t let her drink the water in school, and she knows to ask not to sit by the window,” Gonzalez said.

Her daughter’s school, P.S. 178, is one of 85 citywide public schools — 20 of which are in Queens — where the Department of Education found traces of toxic PCB-contaminated caulk on classroom windows last year. Gonzalez, along with parents in the Bronx and Manhattan, has filed a lawsuit against the DOE and School Construction Authority. And, with the help of attorneys from New York Lawyers for the Public Interest, parents from Queens may not be far behind.

“These are really, really, really bad compounds,” said Miranda Massie, a lawyer at NYLPI. “There’s no doubt that other schools that haven’t been tested have been affected.”

Before the 1970s, PCBs, which stands for polychlorinated biphenyls, were added to the caulking material used to cushion window and door frames to make them more elastic, according to the NYLPI. Although they were banned in 1979, products that may still contain the compound include electrical equipment, oil-based paints, floor finishes and caulking — which has recently been found in abundance on many school windows.

PCBs volatize into air and don’t stay in place, Massie said, affecting the quality of air students breathe, as well as the soil around a facility.

“Even if they replace the windows, that doesn’t do it,” she said. “You need a complete clean up.”
Posted by Queens Crapper at 1:45 AM

And, then, during my campaign for a twelfth term, tell everyone how much I love 'em.

I guess we should accept PCBs in the environment because there are other toxins out there.

I agree with Anonymous 2's comment about the quality of our food. Glad to see there's a like-minded individual out here in the Wild West.

I'm amazed that people are still buying white bread and soda. The big Pathmark in Whitestone barely carries anything organic, citing the local lack of interest. That's total bullshit. An employee told me, off the record, that stocking is 100% determined by how much the manufacturers will pay for the shelf space. It has absolutely nothing to do with what the public wants.

I think it's ironic that the same parents that buy Lunchables for their kids are worried about caulking!

I just realized that I should be dead...pcbs, asbestos, lead paint in the school buildings...heck, my schools had coal fired furnaces as well....imagine all the soot and crap that was floating around in the air....

Thank you for agreeing with me, 'Flooshing Rez'. Sometimes I feel that worrying about the unhealthy things in my daily life, organized according to my own personal hierarchy from most toxic, all the way down the list to PCB contaminated caulking. Leaves me at odds with the obese, smoking, drinking, 'Micky D's' eating, profanity calling majority.
Anon #2.

"..I think it's ironic that the same parents that buy Lunchables for their kids are worried about caulking!"

Flooshing, it's funny you mention that. SO many of my students bring that in for "lunch" and I get so annoyed. How hard is it to pack a sandwich for their kid, especially when they don't even have a job to go to being on welfare?

So, what's a little toxic caulk on windows? Such a Fuss! The new Maspeth High School is being built on a well known contaminated and toxic parcel of land and the DOE and SCA has sanctioned this. Studies have shown this land to be poisonous. The powers that be don't care about your children, they only care about the money they make on these projects. If our kids get sick, Obamacare will take care of them.

was it put in by illegal aliens working under a contractor who has a MWBE certification for the Dept of Education?

you betcha it was!

FlooshingRezident said...
"An employee told me, off the record, that stocking is 100% determined by how much the manufacturers will pay for the shelf space."

Then why isn't the "employee" the store manager?

Perhaps the "employee" actually believes that shoppers who want what a store refuses to provide, will keep shopping where their preferences are defied in favor of the manufacturers' needs.

Yeah! That's how it works.

That's why the schools have PCBs and all sorts of dangerous toxins that can kill or maim.

Pathmark is not in Whitestone, and neither is the "Whitestone cinemas".

I'm glad to see there are other people in Queens who care about what's in their food. Thanks for your comments. Eating McDonald's and drinking HFCS-sweetened soda will be treated like ciragette smoking in just a few decades.

I grew up in Europe, and when I came here I was suprised by the lack of quality bread in the common supermarkets like Key Food and Pathmark. All the white bread they sell is sweetened and soft like a pillow. It smells bad when you toast it. Real bread has a crust. I found a supermarket that sells whole-grain organic bread and since then I'm only buying that.

You can't be possibly eating nitrite-laden salami and cheeze-doodles and then complain about PCB in the caulking. I bet the people who do that think diet soda is healthy.

Ok let me explain something to all of you...

This post is not about food, it's about toxins found in school windows.

It is possible to be concerned about both. But there is no mention in this article of what Naomi Gonzalez feeds her 7-year old.

So please keep it on topic.

Crappy are you a topic nazi? :)

Don't conversations usually veer off in one direction or another?

I'm the moderator. The problem is people bring up shit that isn't even related to the topic under discussion. There are people who do that intentionally for one reason or another. They can do that somewhere else.

Well I'm definitely guilty of that. But I swear it is not intentional. I type whatever pops into my head.
I can't help myself Crappy!

I apologize in advance for future veerings.

This sounds like yet another environmental scare/scam designed to benefit abatement contractors more than anyone else. How much of this stuff actually gets into the indoor air? How much can accumulate in building with leaky, 40 year old windows? Sure, it made sense to stop using PCBs in building materials and it make sense to be aware of them when doing renovations on old buildings. However, it should take more than a declaration that this is "very very bad stuff" to justify tearing apart half the buildings in the school system and risking making a manageable risk into an expensive mess.