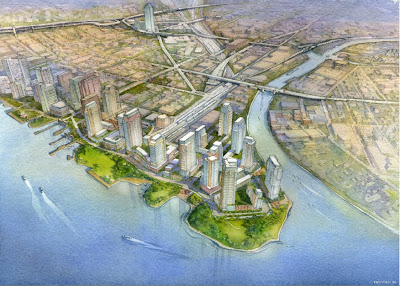 Housing flourished in the westernmost part of Queens, as it did in few other areas of the city from 2002 to 2008, according to a new economic snapshot of the neighborhoods of Long Island City and Astoria by New York state Comptroller Thomas DiNapoli.

The size of the area's housing stock rose by about 4.8%, faster than the citywide growth of 3.6% during the six-year period, the report said, citing data from the U.S. Census Bureau's Housing and Vacancy Survey. According to the report, a total of 3,640 apartment units were added during that time in the two communities, which it calls “one of the few remaining manufacturing enclaves in the city.”

Despite all the new development, 82% of the area's housing is rental apartments, according to the comptroller's report. Two-thirds of the rental units are rent-regulated and the rest are market-rate. For the six-year period, median rent for rent regulated apartments increased 27% to $916 a month, which is less than the citywide median $850 a month. The median rent for market-rate housing rose 37% to $1,357, higher than the citywide and Queens medians of $1,200.

And they wonder why they had a blackout.
Posted by Queens Crapper at 12:07 AM

While the topic is supposedly over development, it will almost certainly turn into a "tower people" rant.

I have been going to Astoria regularly since March 1990. Back then there was still a lot of "old Queens" -WW2 generation left. They were decent people and good customers. Today most are gone.

By the late 90's if you rode the N train especially evenings and nights, you saw mostly Blacks from Africa, arabs and Latinos.

In the last few years this has turned around to an extent. Most of these new residents are young, educated and white, they often prefer apartments over a fifty year old frame house.

My point is that Queens is seeing a profound turnover in residents and if you don't have facilities that appeal to that younger generation..the dreaded hipsters..you may end up with something you dislike even more.

You mean like "Blacks from Africa, arabs and Latinos"?

"In the last few years this has turned around to an extent. Most of these new residents are young, educated and white, they often prefer apartments over a fifty year old frame house.

My point is that Queens is seeing a profound turnover in residents and if you don't have facilities that appeal to that younger generation..the dreaded hipsters..you may end up with something you dislike even more."

If the hipsters like apartments over 50 year old houses, then the shitboxes they are building today are obviously not geared toward them.

"If the hipsters like apartments over 50 year old houses, then the shitboxes they are building today are obviously not geared toward them."

You had me scratching my head over this response 'till I reread my post.

What I meant here is that those hated towers, (not apts inside 50 year old houses) are what these newcomers prefer.

What I also don't get about this tower issue is that it ignores the fact that Queens has long had -big- apt buildings. Forest Hill-Rego Pk-Kew Gardens, those six towers in Woodside and the huge ones in Bay Terrace.

Some of the concerns are legitimate infrastructure. But a lot of it reads as jealously and anti newcomer bias.

Actually, hipsters prefer lofts in gritty industrial areas. It's yuppies that prefer towers. Once they invade you aren't going to afford your neighborhood anymore.

Astoria is getting creamed. Take it from someone at ground zero. Meanwhile all that new construction sits empty because it is too expensive.

"82% of the area's housing is rental apartments"

What happened to the luxury condos?

Hipsters move into blighted, industrialized areas, revitalize the place, new businesses move in, everything is great.

Then....
Newspaper articles about the new "up-and-coming neighborhood"
Landlords see a cash cow, start hiking rents.
Local subway line becomes synonymous with trendy new neighborhood L for Greenpoint/Bushwick, F for Park Slope, N for Astoria)
Trendy shops and chain stores flow in. Long Islanders and New Jersiains pack the main strip on weekend evenings for the new trendy restaurants.
Real estate offices pop up everywhere, offering to buy every parcel of land.
Developers get their hands on warehouses, factories and finally old Ms Mcgillicudy's house where she has lived since she was born 80 years ago. Her greedy kids sell from under her feet and move her into a second-rate nursing home.
Gaudy, out of place towers pop up everywhere, blocking out the sun. The yuppies, wanna-be's and meet, mate and move crowd flocks in. They wipe out any final remnants of a tight-knit community. Vibrant! Diverse! You have arrived!

There is a myth that yuppies are moving into Astoria.

Take a look at what passes for night life there: grim old men nursing coffee in Greek cafes, and skinhead euros launging in bars with the curtains drawn when there is a Balken soccor match, and the word 'Ustashi' spray pained on the gate when its down.

The largest ethnic group in Astoria is now Mexican, the largest group represented in store fronts is Arab, and the streets are filled with ignorant cabbies who learned their craft on the rarified culture of a bazaar.

Astoria is quickly becoming an overcrowded ugly slum like Elmhurst.

Daily infra stucture gets further and further behind and the local population that moves in as a response, get more and more indifferent.

Saying a 'bulging slum' is growth is like saying a 'fever' gives a healthy rosy glow.

I do hope that when all kinds of really nasty ailments hit the people because they are located on what is little better than a toxic superfund site, they sue the ass off everyone that had a hand in this.

Actually, hipsters prefer lofts in gritty industrial areas. It's yuppies that prefer towers. Once they invade you aren't going to afford your neighborhood anymore.
--------------------

Ah, yes, "hipsters", "yuppies" and "invading"! Scary! Let's see if I follow the Crapster logic...I was born in Queens over 45 years ago, my dad was blue collar non-college educated. That makes him a saint, and me (at least for a while) good Queens family stock.

But wait! Now it gets confusing...I went to college, which my dad (the saint) worked hard for (which is good), but then I graduated and now work as a highly-paid smart-ass engineer (which is bad!). Am I a yupster yet? Was I a hipster for a while there also? Can I redeem myself if I buy my dad's old, and too small house and pretend I'm also blue collar? Am I going straight to hell if I want to return to Queens and live in an apartment? Should I also submit to you my list of favorite books and music to see if I pass the Crapster special "real Queens" test?

My head is spinning with the inanity of it all!!!

Astoria has its share of hipsters and maybe even some wanna-be yuppies. They may even like it here. But then they brag about Astoria to all their friends and invite them to sample the local "diverse culture" of Steinway, Broadway and 30 Ave. They then suffer the humiliation of their friends' disgusted looks as they stroll around and complain about the "long" subway ride from Manhattan or Brooklyn, After their friends never come visit them again after that first visit, the young budding Astorian begins scouring craigslist for a roomate and a trendy Williamsburg apartment.

Wait...
I thought hipsters were yuppies.

I cant believe the debate here is the meaing of hipsters vs yuppies.

This is one of the most toxic sites in the country and its a place that they want to move families - young kids for Christsake - and all you can do is debate semantics?

Goes a long way to explain how the two bit bums running city planning pulls the strings on all of you like a marionette.

What is next, housing on nuclear test sites from the 50s?

Hipsters and yuppies are two different animals. Hipsters wear grungy clothing, have multiple roommates and act aloof, yet somehow manage to carry expensive gadgets with them. Yuppies try to look polished even when they go to the gym and are proud of overpaying for condos in buildings with pretentious names. To see them side-by-side, go to Williamsburg.

Thank you for mentioning the toxicity of these sites. Apparently cancer is the new black.

Even a child could notice how common cancer is in the Long Island City/Astoria area.

I don't give a flying crap about who lives in Astoria as long as my rent stays the same.