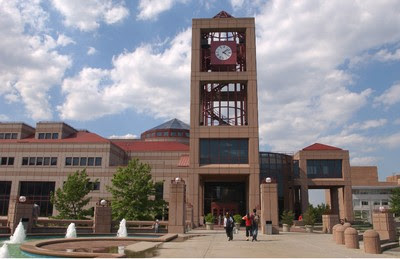 A controversial imam who authorities have called an unindicted co-conspirator in the 1993 World Trade Center bombing is scheduled to speak tonight to a Muslim student group at Queens College on the subject "How Islam Perfected Thanksgiving."

The appearance by Brooklyn mosque imam Siraj Wahhaj - who also testified for convicted terror plotter "blind Sheik" Omar Abdel Rahman - and a recent nasty verbal altercation involving members of the Muslim Student Association that invited him, has spurred some other students to demand that Queens College cut off funding for that group.

Professor Tim Rosen said that at a screening of the anti-radical Muslim film "Fitna" two weeks ago, a MSA member was "laughing" and muttered "good" during footage showing American businessman Nicholas Berg being beheaded by terrorists in Iraq, and that the student was "giggling and saying 'good' " during footage of planes hitting the Twin Towers.

At a raucous post-screening debate with Queens College Republicans, who hosted the film, an MSA member said, "If I had enough money I would be part of the jihad army, I would kill all the Jews," recalled College Republicans treasurer Eli Karl.

"He said, 'When I get enough money, I'm going to do some pretty bad things . . . and he talked about getting a bomb," recalled Karl, who now supports de-funding MSA.

Girdusky said a female member of MSA "said something like, 'How could you show something like this [the movie] when we get attacked for denying the Holocaust? ' "

The MSA did not respond to requests for comment.
Posted by Queens Crapper at 12:14 AM

I bet all those radical IslamiC students are in the USA on a student Visa. This type of crap makes me sick to my stomach. They DESERVE NOTHING from the USA. Their countries offer them nothing in the form of education, or a better life. The only way out of their own personal hell is to become a martyr. I am sure Queens College receive funding paid for by NYC taxes. No wonder they are lalughing at us. DISGRACEFUL.

Did anyone notify the FBI?

Diversity is one thing. They way this country and this city DEMANDS diversity, and the level of which they demand, is poisonous to any civilized society.

Fight fire with fire. When this imam comes to campus, he should also be heckled by audience members.

Let the chips fall where they may.

As long as the subject of Islam is in the public forum, I'm all for it. The more nefarious the Imam, the better (although I'd prefer deportation of subversives). Just as Ahmadinejad lost any sort credibility in western academic circles, so to can Siraj Wahhaj. The more they speak, the more they hang themselves.

Just as Ahmadinejad lost any sort credibility in western academic circles....
-----------------------------------
Did he? I could be wrong about this, but I don't remember anyone who invited him to speak, or anyone who went to hear him, raise any outrage or objection over what he said. Ironically, for the far-left liberal crowd who claim to detest facism and dictatorship, to support a dictator of their selection.

Columbia University - Sept. 24, 2007:
"In introducing Ahmadinejad to the audience, Columbia University President Lee Bollinger described him as someone who exhibits all the signs of “a petty and cruel dictator” and said that his remarks on the Holocaust, whose existence he has denied in the past, make him look “simply ridiculous.”

A Student's remarks:
“In terms of Ahmadinejad, I think that Bollinger issued a very, very strong challenge to him," Port said. "And in his typical fashion, he dodges questions because he can’t answer to his other statements, you know. He is a polemicist, and he can’t answer for himself.”

And who can forget this peach...
"Asked about the execution of homosexuals in Iran, Ahmadinejad drew derisive laughter from the audience when he said, "In Iran, we don't have homosexuals, like in your country. ... In Iran, we do not have this phenomenon. I don't know who's told you that we have this."

I don't think I need to quote comments made in the main stream media when Ahmadinejad went on his Holocost denial tirades, do I?

Yank all their scholarships and give them to American college students. Pack them all up and deport their asses home. Let's see them get a free college education in their homeland.

I'll never forget when I was a student at Queens College, a whole bunch of Iranians were showing pictures of hooded people being tortured by the Shah.

1 year later, after the hostage crisis, the same pictures and the same protests re-emerged, this time naming Kohmeni as the culprit.

What a shame we can't develop alternative energy sources fast enough to let all of them drop dead.

I once saw a bumper sticker that said "Nuke their ass and take their gas", initally I thought it was a terrible statement. Not so sure anymore.

These groups should not be invited for any reason on Campus. They are recruiters of students whom are vulnerable to hate talk they spew.

WHAT IS HAPPENING TO THIS COUNTRY???

MY FATHER, A WWII VETERAN, IS ROLLING IN HIS GRAVE RIGHT NOW.

OH, I'M SORRY....I AM BEING POLITICALLY INCORRECT OR WHATEVER HORSES*##T YOU LIBERALS HAVE TO SAY.

You are absoluetly correct. The speaker is their to inflame the young Muslims with hate, and to look for the mentally weak, that he can push into being a radical crazy. Paid for by US tax dollars which is despicable.

HAHAHAHA!!! PLEASE! THE UNITED STATES SUPPORTS SAUDI ARABIA AND EGYPT - WHAT ELSE DO YOU EXPECT? YOU COMPLAIN SO MUCH BUT BUY THE OIL HUH?

So it is acceptable to fly planes into buildings if a country buys oil from you?

it's amazing how everyone complains but no one protest! this country is going to shit!!!

need to move to australia at least the leader tells them to get the hell out! wait till they bring the crap to nyc for a trial, get ready folks all the sleepers will be awoken..

i would start writing to senators and the president and demanding them not to be allowed on american soil, especially nyc near the WTS... sickening..

I am concerned that NYC tax dollars are going to pay for the trial. But when they are found guilty I wish they would be hung by their necks from the new World Trade Center.