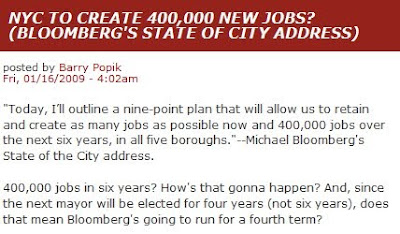 The city has placed 20,620 New Yorkers in jobs since the beginning of this year – already surpassing the 20,000 goal Mayor Michael Bloomberg set for this year.

During his State of the City speech this year, Bloomberg set the 20,000-job placement goal, which was an increase from the record high 17,000 placements the city had in 2008. Currently, the city is on pace to place 23,000 people in jobs this year.

“City government can’t end the national recession, but these job placements show we can make a real difference for individuals and families,” Bloomberg said at 1010 WINS 5-Borough Business Breakfast in Brooklyn on Thursday, November 19. “They are the latest indication that there are businesses in all five boroughs that are growing and hiring, and we’re doing everything we can to support them.”

Earth to Bloomberg (and the Queens Courier): You promised to create 400,000 jobs over 6 years. Then you went on a firing spree. And city unemployment is at 10.3%. Stop lying, asshole. The campaign is over.
Posted by Queens Crapper at 1:53 AM

Plant a million trees - while he cuts tens of thousands.

Every New Yorker will be within a ten minute walk of a parks for the family - as he destroys Ridgewood Reservoir, and refuses to convert Maspeth's Saint Saviour's land to a park.

Every child will be safe in school - as they shoot each other on the school sidewalk.

The Commissar is a common liar who prefers lying. He refuses to be truthful.

In a great 1985 movie, Ladyhawke, Rutger Hauer's character asks Matthew Broderick's character "Why do you always lie? Can't you ever ell the truth?"

Broderick's character replied: "Lying is so much more fun!"

The Clinton grifters were known to lie even when the truth would have been more useful.

That explains common liars such as the Commissar.

What explains the media's moronic echoing of the Commissar's lies?

When the listener who knows he hears a lie, and yet passes it on, the reason is to join the original liar in exercising control.

The purpose of lying is to control a situation and the listener.

Uhh..OK. I guess He's done a pretty good job considering the economy is in the crapper. And he got reelected. So, I guess he's no worse than any of the others.

Anonymous said:
"Uhh..OK. I guess He's done a pretty good job considering the economy is in the crapper. And he got reelected. So, I guess he's no worse than any of the others."

If he did a "pretty good job", then why is NYC's unemployment rate so high?

If he did a "pretty good job", then why did this Titan of Commerce, Financial Genius Commissar fail to see the coming recession? If he did see it coming, then why didn't he take a moment from all the private property land thefts to tell us about it?

If he did a "pretty good job", then why does he have to lie all the time?

Tired of Being Jerked Off said...

How can I screw you? Let me count the ways. Oops. Can't right now. My fingers are up too many butts!

Why stop? There are way too many books left to cook!!!

whean america, she git a cole, in mi coontri we git pnemonia.

honest joe, he is our amigo. de maya, he goon mon too.

Who not get on Obama for the same thing. Supposely the stimlus creaed millions of jobs. Have you seen one? Its not a bloomberg things it every politician. Say someting often enough and people will believe it.

No one has a real job anymore or else they are working at a job they hate and are afraid to leave.

thanks to the illegal immigrants who will either work for very little or have their extended families & the US government to depend onn.

what is Bloomberg doing about illegal immigration?

The press can't criticize Bloomberg because they've been bought off. If the press doesn't agree with Bloomberg and expresses their disdain, he just pays them off. It's all about him. He must always win. Look how much each vote cost him in the election. Very pricey, but he won. He'll run for a fourth term too and win. New Yorkers will never get it. Nobody in this city has as much money as he does, so he can buy everything.

I don't think we show the Crapper the appreciation that the Crapper deserves. Day after day searching for items of interest so that we can comment, trash (the articles and each other), or the best yet...learn from!!! The problem with the "established" media is that there are very few reporters who will do original research and really delve into a story. Most of the items that we read about, see on TV, or hear on the radio come from news releases straight from the source. These so called reporters never seem to question what is being fed to them. If they were doing their jobs properly, Bloomtard should have lost by 5%!

When I come to Queens Crap, I know that some of the people will, in their comments, reveal the truth. Some even provide links to the sources. The Crapper is not perfect but we have a platform that we can use to share our thoughts and concerns. All we need now is a couple of reporters or reporter wannabees to provide fresh new material and insights about Queens to this blog's readers. Do we have any Woodward or Bernsteins?

Happy Thanksgiving Crapster and all of you bloggers...good, bad, and ugly. By the way, I hear that the ugly part is being hotly contested between candidates Moby Stavisky and Bovine Shulman.

Agreed. Even though I have yet to agree with the Crapper on ANYTHING, I have to give credit where credit is due - it's a great blog thanks to the Crappers efforts.

Too much negativity for me at times - but, heh it is called Queens Crap isn't it - so be it - as long as the presented facts remain truthful, the commentary is what it is - commentary.

The Crapper said "Stop lying, asshole. The campaign is over." For 2009, yes -- but the campaign for 2013 has just begun, unfortunately for us. The Kommissar already has set his sights on a fourth term. Egotistical piece of crap!

why didn't congress send $300,000,000.00 worth of Obama/stimulus to n.y.c.,as they did for the vote of sen.mary lambreaux of louisiana ? aka the louisiana purchase.

so far the queens dems seem to have only gotten a reported $17 million,out of the n.y.c.share of $87 million.

jobs will be plentiful for the dem faithful.