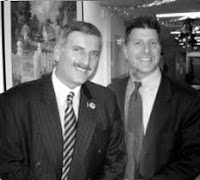 The 24th Assembly District in northeast Queens may be trading one Weprin for another as outgoing City Councilmember David Weprin announced that he will run for his brother Mark’s vacant Assembly seat.

David, who decided not to seek re-election to the City Council and ran a failed bid for City Comptroller earlier this year, said he will run in a yet-to-be-called Special Election for the Assembly seat that will likely take place in February or March. The Assembly seat is open because Mark was elected to the City Council in November, and he will take over the seat David held for the past eight years.
Posted by Queens Crapper at 1:17 AM

You had to be blind not to see this coming! There will be a special election to fill the assembly seat, and David will be the only candidate. Ballot access does not exist and lately it seems that the voters of Queens could not care less.

Sounds like these 2 will be gainfully employed for years using this stratergy.

From Saul to his sons.

David is the smarter of the two.

Dirt has a higher IQ than Mark!

No wonder Queens is in a fix!

Ackerman has been gainfully employed for 14 damn terms, I believe!

Talk about job security...thanks to you ignorant tweeded voters!

Sometimes I think we don't deserve to live in a republic.

The average American is too dumb to vote intelligently!

So we all wind up being f----d in the ass as frequently as a new fish gets his in the prison shower room!

My mistake...Mark or David Weprin?

Who has the higher IQ.
I get confused!

It doesn't matter who the puppet is---pay attention to the puppet master!!! He's a disaster.

"Talk about job security...thanks to you ignorant tweeded voters!"

Where are the opponents, either Republican or Democract? There have to be viable candidates to oppose him. Last time, I voted for Liz Berney, but there has to be someone with experience and name recognition - like Tony Avella.

FOR GOD'S SAKE GET REAL JOBS!!!

Tony couldn't get along with anybody in the city council and
Bloomberg hated him.

Avella will wind up making an enemy of everyone in Congress and becoming an emasculated cardboard representative!

Unfortunately...politics is the art of deal making...the art of the possible.

Too bad for Don Quixote Avella whose heart is too pure (heh, heh, heh...no, I really don't so pure)!

Leave David Weprin alone. He went up against Bloomberg when no one else did.

the dem machinery thanked him by endorsing John Lui.

thank you Working Families Party, and acorn for screwing us all over

Amen Brother (or sister)!!!!! If Ackerman is allowed to use his paper to attack opponents on personal rather than political issues, it will continue. Who is going to stop him? He has a strong base and the incumbency, not to mention his hit job Trib. I think that he will be vulnerable next year as people are waking up and seeing that these old-timers are only out for themselves. Is there a good candidate out there?

These boys should hang it up and get real jobs. They'd last one hour in the real world of business. Public service must be pretty lucrative for these two.

if the brothers weprin got real jobs how would the special interests (their favorite religious groups ) get n.y.c. tax dollars, to pay for their property ?

What a nifty (or should I say "shifty") way to get around NYC term limits -- a tag team of politico brothers. Interchangeable with each other, no matter what the political office, NYC Councilmember or NYS Assemblyperson. As one Anonymous said, this strategy could have them going for years, unless we wise up and boot them out onto their asses.

Unless one of you is Bob Friedreich, who actually ran twice against Mark Weprin, you all sound like a bunch of blowhards. A bunch of sour grape blowhards. At least Friedreich had the guts to go out and take a stand which is more than the morons who run this blog can say. I wonder how long this comment will be up before the "enlightened" editor takes it down.

I have no intentions of taking your comment down. You just proved yourself to be the real moron. People have been complaining about elected officials since the beginning of time. They are supposed to be representing us and we are entitled to criticize their performance.

"I have no intentions of taking your comment down. You just proved yourself to be the real moron. People have been complaining about elected officials since the beginning of time. They are supposed to be representing us and we are entitled to criticize their performance.

Well that is such a relief. I think I will pass on your invitation to jump in the creek though.

I have no problem with this blog and actually admire a good chunk of what it talks about especially the Manhattanification of Queens. I was upset that one of my comments on Willets Point was taken down. Maybe if they could actually clean up the DoB and staff it properly a lot of what you rail against would not happen. And don't get me started on Sadik-Khan. She has to GO!

With regard to the Weprin family, you certainly don't have to love them but as a family all of them have devoted countless hours to public service. And it is not as if they are getting paid a lot of money for doing so. David ran for comptroller and got clocked. Mark ran for Council and had credible threats in the primary and the general elections. No automatics there. If the voters in Eastern Queens want Mark or David or whomever as their elected officials they will or will not elect them. David is going to have a serious challenger in February presuming he is the Democratic candidate for Assembly. If you don't like that you can volunteer for his opponent.

Anyway...enough venting and Happy Thanksgiving to all.

First we had Gennaro opposing term limits, then running for a third term unopposed.

Now, we have the Weprin brothers playing musical chairs with public office.

My family left Russia for this?

I voted for Bob Friedreich.

I wanted to send both Weprins and their bad hair pieces packing.

Between this and O-bow-ma, it's a very said state of affairs.

Mark Weprin is the biggest wimp in politics. EVERYONE makes fun of him behind his back ! His brother with that bad breath is a bigger loser, but Mark actually thinks he is smart.

Spoiled kids, just like the Vallones, who will live their lives never having accomlished a single thing, but lives based on their fathers. Quite pathetic.

Those of you who think the Weprin brothers are devoted public servants do not understand that the city council and state assembly are just PART-TIME jobs for them and they still have lucrative law practices that are fed,by the connections they make in political office.

It's repulsive to say the least that David and Mark are 2 of the 4 A.D. leaders who decide who the dems are putting up for the special election for Mark's assembly seat.

A disturbing number of people told me that in the council race they were voting for Weprin (doesn't matter which one, they are interchangeable) because they "knew their father Saul" or because their son or daughter "went to school with them", etc, etc, etc. For a large number of people their choice had NOTHING to do with any critical analysis of who would be best for our community, just a blind, baseless loyalty to this power-grabbing political family. .

The special election for assembly could be a very different beast, however, if Bob Friedrich runs against David and I'm holding out hope for that and for a Weprin-less assembly!

By the way, Bob did predict this offensive Weprin switcheroo more than a year ago - and when he vocalized that prediction, he angered the Weprin boys who vehemently denied orchestrating this scheme well in advance. We of course now know that denial to be a blatant lie. How insulting this is to the voters of Queens!

Did anyone happen to hear that David is also planning on running against Senator Frank Padavan? If this is so, that would mean leaving the Assembly mid- term to take on yet another political position. Not to mention that he would be in campaign mode the moment he takes office (assuming he wins). I also urge all of you to check David's record with City Council. Remember, he was chair of the Finance Committee. Need I say more? I am voting for Bob Friedrich.