Construction unions are in the money 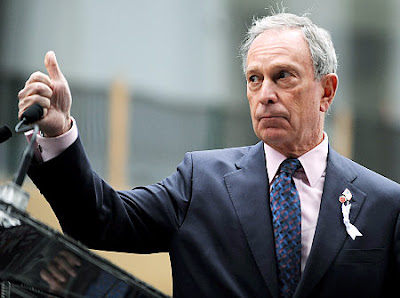 A new deal hatched between Mayor Bloomberg and the Building and Trades Council will net union hardhats an estimated $10 billion in work in coming years, The Post has learned.

The deal -- hammered out ahead of the Nov. 4 election narrowly won by Hizzoner, with the backing of the council -- will ensure that union labor does the rehabilitation, renovation and new construction on many city projects for the next several years, sources said.

To trim their historically high costs, the unions agreed to work- and wage-rule concessions.

Rebecca Meinking, president of the non-union New York's Associated Builders and Contractors, said, "It's ironic that the unions set up these arcane work restrictions, then ride in on their white horse and say, 'OK, we'll lift them if you give us work.' It's extortion, if you ask me."

Photo from the Daily News
Posted by Queens Crapper at 1:19 AM

In his head, Bloomtard is actually using a different finger!

Remember me arschlochs? I am varning you. Look der other vay!!!

The caption on that photo of the very attractive Commissar should read: "Now where's my fuckin' kickback?"

Screw with me and I'll sic Nazi Parvizi on you!