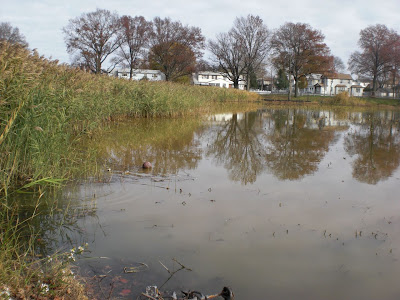 "There was actually another basketball deeper in the (not Willis) reeds... no wonder St. John's has been so lousy since the '80s; Queens kids gave up!" - WWIB

Well that was a little strange, but today let's be thankful that not all of our natural places have been paved over.

From the Parks Dept:

Baisley Pond was created in the 18th century when local farmers dammed three streams in order to power their grain mill. The 30-acre pond and the park are named for David Baisley, a local farmer who owned this land in the early 19th century and operated the mill that was located on the pond.

The City of Brooklyn used its local wells and cisterns for water until 1859. Due to the drastic need for clean water in Manhattan, and sensing that it too would need alternate water sources, the Brooklyn Water Works acquired Baisley Pond for its water supply in 1852. In 1898, the City of Brooklyn voted to become a part of New York City during the consolidation of the five boroughs. This decision was made at least in part to alleviate water supply problems.

While dredging Baisley Pond shortly after its acquisition, Brooklyn city workers made a startling discovery. Buried in the sediment, the remains of an American Mastodon (Mammut americanum), including five molars and a bone fragment, were found. The Mastodon likely lived in the area almost 10,000 years ago, just after the last Ice Age. Today, a sculpture of a Mastodon in Sutphin Playground commemorates the discovery and makes for a unique playmate.

In 1914, the City transferred the northern half of the property to Parks and the site opened to the public in 1919. At the time, Queens was still a predominantly rural area, and the park remained a rustic preserve. In the 1920s, the area was urbanized as developers built hundreds of single-family homes in the neighborhood. During the Great Depression of the 1930s, Commissioner Robert Moses (1888-1981) and the Works Progress Administration constructed recreational facilities in the park, including a boat landing, several playgrounds, tennis and handball courts, baseball diamonds, and a football field.
Posted by Queens Crapper at 12:00 AM

Baisley Pond is part of a buried stream that once originated in Jamaica's Beaver Pond, and ran south through Baisley PArk towards Jamaica Bay.