"Just compensation" is just a joke to NY 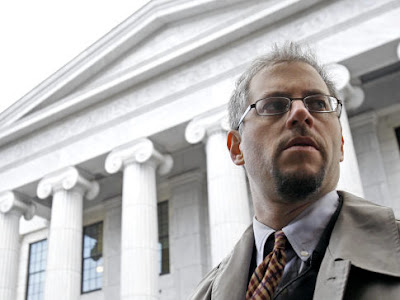 Property owners challenging the condemnation of their homes and businesses for the Atlantic Yards project charged the state is adding insult to injury by lowballing offers for their property.

"They're supposed to pay just compensation and there's nothing just about it," he said.

The September letter from the Empire State Development Corp. says the offer "represents the fair market value" of the property.

In any ordinary transaction to buy or sell anything - from a stick of gum to an immensely profitable international business - there is an offer (to buy or to sell) and then the acceptance of the offer.

Once there's an offer and a willing transaction opposite, negotiations begin.

Negotiations are the free expression of self interest.

But, in the command and control world of this career Commissar, negotiations are illegal. Common street thuggery is the rule.

Daniel Goldstein never offered his property for sale to anybody. In this criminal case, the ultimate illegitimate profiteer is an organization that never met or negotiated with Mr. Goldstein.

No, instead of free market negotiations, the Commissar used the force of the police state to command an unwilling Mr. Goldstein deliver his property to another party at the price determined through power.

The criminal act is that Mr. Goldstein and many others were never asked - they were COMMANDED - to surrender their property to someone who wants to make a gigantic profit from its use.

Why were there no negotiations? Because the thieves refuses to make known the expected profits and allow Mr. Goldstein and others to negotiate for a share of those profits.

Profit sharing is a normal part of negotiating the purchase of any profitable enterprise. Why has the career Commissar stepped in to prevent that?

Oh, wait! Perhaps the profit sharing is to occur between the ultimate profiteer and the criminal middle man.

And, the criminal middleman and his wealthy cronies have commanded all the taxpayers in this city to be a participant in the crime.

Property taking without consent and negotiation is grand felony theft of property. And, if you voted to let this criminal Commissar stick around, then you participated knowingly in the theft. And, if you stayed home, you are just as guilty.

We all KNEW this was going to happen.

And there is nothing we can do about it! A lot of people did not sanction this despot's turd term (4th anyone?). Unfortunately, the mainstream media ignores these affronts because our own little Napoleon commands them to do so. United States of America 1776-2009.

And on top of it, many times there are unwanted capital gains tax consequences.

Dan is a hero. The amount of land grabs under the Bloomberg administartion is so wrong.

Willets Point and NYU and Cooper Union don't even need to abuse eminent domain to get the job done.

Battling to save neighborhoods from Bloomberg's tsunami of community crushing development you hope for late in the 9th inning saves that rarely come.

Dan reminds me of Jimmy Stewart in a Frank Capra movie without the happy ending so far. He has been tenancious and courageous. He deserves to win.

Thanks Queens Crap.
Typed with one finger iPhone
Suzannah B. Troy

Some of the "condemnations" to build Lincoln Center and the World Trade Center are well-documented. These abuses seemed to have started when it was New Amsterdam.

Patrick Sweeney said...
"Some of the "condemnations" to build Lincoln Center and the World Trade Center are well-documented. These abuses seemed to have started when it was New Amsterdam."

So, Patty, you believe criminal theft of private property to transfer to another private entity at a loss for the private property owner and the excess gain for the beneficiary of the theft is a grand idea?

"No", you reply. But, just look at the fine results of having stolen without the free consent of the owner.

Now, theft of private property is not limited to land.

It could be your car, your PC, your wristwatch, your clothing. IT can even be your bank account or everything in your pockets. Your stereo and all your CDs.

It can be your jewelry and the gold in your teeth.

Patty, what limits do you place on this kind of power theft?

Em Dom is a tool to steal. the price this guy is being given for his unit is plain robbery. Let the developer come up with the dough or get out of town - time to get rid of these developer seeking public dole. They need to shoulder the risk not the taxpayer nor the resident who's property is desired, taken away and not properly compensated for it. It's robbery plain and simple.

Hey Linda,
What do you mean again?

Like they need another school there. Why is the park not completed nearby - why fussing of landscaping hills and ugly rock - get this park completed so that the middle class homeless can move in already!