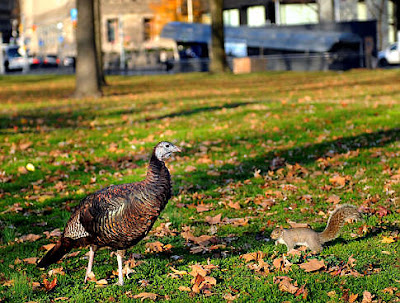 That was the word Sunday from shocked tourists as they snapped photos with New York's famous Thanksgiving mascot in Battery Park.

"Go hide before someone eats you," pleaded Nicole Dhillon, 28, of Brooklyn.

The wild turkey has been roosting in Battery Park for at least six years - but she still caused a stir Sunday when she showed her spectacular fan of yellow, dark blue and brown feathers.

The wild turkey was named after Zelda Fitzgerald, wife of F. Scott Fitzgerald, because the woman also was found wandering in the park after a nervous breakdown.

Zelda now may be the nation's only wild turkey with a Wikipedia page.

In 2004, she went astray, leaving the safety of Battery Park for an Easter strut in Tribeca. She briefly disrupted traffic along the West Side Highway before she was returned home.

Turns out she's one of about 7 million wild turkeys living in the U.S.
Posted by Queens Crapper at 12:05 AM

My family has lived here for thousands of years. Where did all the riff-raff come from? Where's my rent? Perhaps they can all move to Queens.