Tough questions for the tweeders 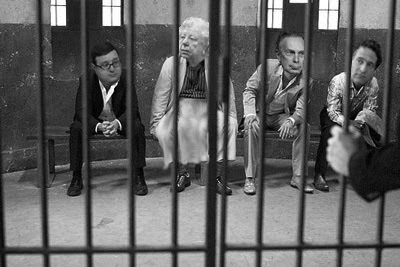 A number of interesting follow up questions emerge from the NY Times story-and our own post-on the illegal lobbying operation that was set up by the city to push for the Willets Point development. In our view, some of these questions are of a political nature, and should be addressed by the various local and city wide campaigns; but others are of a legal nature-and these should be carefully scrutinized by law enforcement at all levels of government.

(1) Claire Shulman's continued role: If, as Shulman says, she was hired to do lobbying from the get go, and this is allegation is disputed by EDC and the mayor's office, than why is the city continuing to fund someone with money that she is clearly using for lobbying (as her lobbying registration suggests)?

(2) If Shulman failed to register as the lobbyist for the FWPC LDC, why wasn't she fined $59,000, as was the LDC itself?

(3) Was the groups' failure to note that it would be lobbying in its federal tax filing a criminal violation, and/or does this affect its not-for-profit status?

(4) Who are the members of the board of this LDC, and what were they promised to pony up the matching funds?

(5) Does the fact that these companies stand to benefit from the LDC's lobbying activities, mean that each and every one of them should have been listed-under the requirements of the state's lobbying statute-as "third party beneficiaries?"

(6) Does the fact that the city is funding illegal astroturf groups with tax payer money violate any provisions of municipal law?

(7) Can the Willets Point businesses sue these colluding companies-along with the city-under the provisions of the civil RICO laws?

(8) Does the use of an illegal lobbying group to aid and abet the city's Willets Point land grab invalidate the ULURP application that was passed last year by the city council? And should this challenge be added to the existing Article 78 proceeding that will first be heard today in state court?

All of these issues need to be addressed-and we're hopeful that the AG will act expeditiously here. We're also hopeful that the issues raised in the Article 78 proceeding-covered well by the Crain's Insider yesterday-will bear fruit and give further evidence of just how nefarious this entire land grab scheme has been.

In response, Bloomberg says to stop picking on Claire!

“It’s a cheap shot at Claire Shulman, who has dedicated her life to this city,” Bloomberg said during an interview with reporters and editors from the Community Newspaper Group, TimesLedger Newspapers’ parent company.

“These groups are designed to lobby,” Bloomberg continued. “I don’t know if they technically broke the law.”

Actually, the EDC said they're not and they didn't give her the money to lobby.

State law says local development corporations are prohibited from lobbying.
Claire Shulman admits her LDC lobbied the city with city money and says it was Dan Doctoroff's idea for her to do so.
The Parkside Group backs up her claim and says they helped her lobby.
The mayor's spokesperson and EDC say she was given city money, but not to lobby.
Bloomberg says that the intention of her group was designed to lobby contradicting what his EDC and spokesperson is saying. It also shows his ignorance and arrogance when it comes to following the law.

Let's just bring in the Feds. They'll sort this out.
Posted by Queens Crapper at 1:50 AM

I feel dumb for asking this, but I'm new around here....what exactly does "tweeding" mean? Thanks!

Look up the term honest graft.

http://www.youtube.com/watch?v=UVBApub6xOc
The above link is to the Village Voice article on Christine Quinn padding her campaign staff with her city council staff. FYI -- Christine Quinn has a big, very big staff because she is the speaker for city council and apparently despite working full time jobs at City Hall they have logged in a lot of time campaigning for her making up almost 1/3 of the campaign staff.

It is against the law to have your city council staff working on your campaigning during company time. Of course they deny they work on Quinn's campaign on company time.

Seabrook and Stewart say they are innocent but Stewart was caught in another lie, oops, I meant to say a lie...he said people were endorsing him that are not! Just another day at City Hall and it seems like the politicos at City Hall are confident no one is going to make any public arrests at City Hall.

Thanks to ex-City Council member Martinez for actually pleading guilty and admitting he was stealing from the get go.

Everyone just plays the "denial" game....deny, deny, deny and people will lose interest and hopefully they are not paying attention in the first place!!!


Thanks to the Village Voice for this article....
Tweed del dee
thanks
Queens Crap,
Suzannah B. Troy

There aren't enough Republicans involved for the feds to take an interest.

Where is the Federal Investigation, or did Bloomberg buy them off?

I have a theoretical question to ask the group. How can one tell if Bloomturd bribes that bovine Shulman to keep her cud chewing yap shut by making large deposits in a bank account with her name on it? Can such transactions fly under the radar or will hush money come to the surface? Any thoughts?

What is Tweeding? From Gangs of NY:


Boss Tweed: The appearance of law must be upheld, especially when it's being broken.


Boss Tweed: Bill, I can't get a days work done for all the good citizens coming in here to harass me about crime in the Points. Some even go so far as to accuse Tammany of connivance in this so-called rampant criminality. What am I to do? I can't have this. Something has to be done.
Bill: What do you have in mind?
Boss Tweed: I don't know. I think maybe we should hang someone.

What do we pay the Queens DA Brown for he does do anything. Never does a corrupt case the feds do Brian and Tony

Lets get a DA who will put these bums in jail