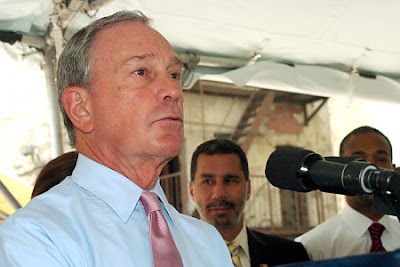 Like Goliath outlawing slings, Mayor Bloomberg on Wednesday proposed new campaign finance rules that would apply to nearly every candidate - except himself.

As a billionaire who bankrolls his own campaigns, Bloomberg doesn't accept contributions and so wouldn't be held to his newly proposed restrictions.

Bloomberg's proposals did not come from his City Hall office, as an earlier wave of campaign finance reforms did several years ago.

They came instead from Bloomberg campaign spokesman Howard Wolfson, who introduced the proposals in the mayor's midtown campaign office after slamming Thompson for taking money from pension fund managers while overseeing city pension funds.

"Mike Bloomberg doesn't take a dime in special interest money," Wolfson said. "No one will ever have to wonder whether contributions influence his decisions....He works only for the taxpayers."

Correction: He works only for rich developer taxpayers.
Posted by Queens Crapper at 12:05 AM

"As a billionaire who bankrolls his own campaigns, Bloomberg doesn't accept contributions and so wouldn't be held to his newly proposed restrictions."

Actually, he campaigns on the public teat after all.

RCN has a channel called "Access Mayor" with very current lengthy videos of this turtle faced Commissar - accompanied by the toadies all on our payroll and time - announcing this or that moronic new venture.

Since he's not paying the freight for this TV time, either we are, or RCN is providing extremely valuable in-kind campaign contributions.

Where is this being reported?

Who is investigating this abuse?

How's this for an idea? What about a campaign to rid the city of Bloomtard before the November election? I'm just sayin'.......

None of the laws apply to him! Don't you people understand? He's special and he's a billionaire. He can do whatever he wants to do. This is his city. He can even circumvent the term limits law after voters voted for them twice. Our job is to pay for everything. End of story!

Bloomberg is as big a liar as Nixon and as much a trouble maker comparable to Limbaugh's operation chaos when it comes to voter laws.

Seems like he's handling the economic crisis as well as Bernake, so Bloomberg needs to go.