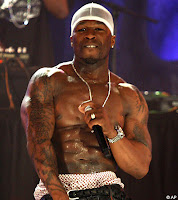 QNS. FITTY FEST IS OFF
By CHUCK BENNETT, NY Post

Fitty wasn't going to let anyone party without him.

The foul-mouthed gangsta rapper canceled the entire "Family Day" neighborhood fair he planned over fears that his very appearance would spark violence, his manager said yesterday.

"We are postponing it and working it out with police," said Chris Lighty, Curtis "50 Cent" Jackson's manager.

The event was scheduled for tomorrow at the PS 40 schoolyard in Jamaica, Queens -- just blocks from the spot Fitty was shot in 2000.

The Post reported on Aug. 17 that cops worried that they lacked the manpower to keep the peace at the event.

Originally, Fitty was going to perform but later said he would just make an appearance. Regardless, cops worried that a punk out to make a name for himself or someone with a grudge might try to shoot him.
Posted by Queens Crapper at 8:40 AM

ayo yall wite peoples always be hatin on us. ya dun wan dis nigga to be gettin money. ya cant stand to see a black nigga be rich

What an ugly son of a bitch.

You have to work harder on the fake accent, pal. Black people don't talk like this.

Fifty Cents made a wise decision for once. He chose the safety of his fans over personal aggrandizement.

One of my colleagues is related to him. I think a second cousin. His real name I think is Curtis and supposedly is a real nice guy.

too bad.
might have been the perfect place for Bloomie to go and have a glass of chardonnay.

Fitty could still show some G-Unity without having to appear in person.

His real name is Curtis. I met him when fellow G Unit rapper Tony Yayo aka Marvin Bernard lived in Bay Terrace back in 2006. Its ridiculous they won't allow him to appear at an event he sponsors yet they allow such violent events to take place as the Puerto Rican day parade where there are TONS of arrests every year. The city is being biased against african-americans during a voting year.. I'm shocked.. seriously.. I am