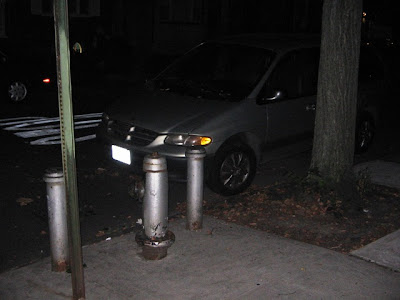 The two images here are of a stolen and then abandoned minivan with California license plates. Here is the back story:

1. We first noticed the car with 3 parking tickets (obviously for blocking the hydrant) and figured it was stolen. We also noted that the radio was missing and the car has a big dent in its side. So as anybody would suspect, the car is abandoned.

2. We had first called 311 and they told us that WE ARE RESPONSIBLE for towing the car and paying the charges. WTF!!!! We are not spending our hard earned middle class money on towing a car that some jackass(es) left us to deal with.

3. After calling 311, we then called the 104 Precinct (a.k.a. the country club) directly at the desk number and spoke with a rather nice officer (as a surprise to us) who told us the car will be towed by them to the impound lot on Tuesday the 4th of Aug. So we waited...and waited...and fucking waited and still no tow truck despite our almost daily call to the 104 again. 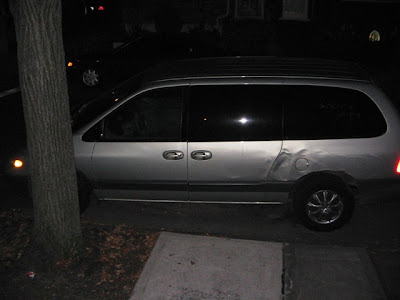 4. Now, we had to kick it up a notch and think of who is next in line with community issues and we decided to call Elizabeth Crowley's office. They said we will tow the truck immediately and not to worry. STILL WAITING!!!!!!

What more can we do other than point out to whichever politicians read this wonderful blog (and I don't mean that sarcastically) and see their names or departments smeared with some hot crap! We are tired of waiting since this car is blocking a fire hydrant; something of great value when it comes to putting out a blaze here on our street. God forbid there is a fire, who knows who will live or die... I guess we have quite a few people to thank on this one don't we?

By the way...CITY SERVICES SUCK ASS!

P.S. Bloomturd continues to preach his services are best. Bite me you fool! Run up a tree and do us some good.

hey alex at least you got someone to answer the phone at the 104 pct. the police station has to be on the top ten worst pct in nyc. they were in the papers for not answering the phone, so i would like to appauld you first! keep on those lesbians as one quoted on a blog, they don't do dick!!!!

Start calling NY1, 7 on your side etc until one of them comes and does a story. Then maybe someone will do their job... but I doubt it. I live in Glendale too, Alex can you post where this car is and I'll start calling also. Maybe the G-cops can help, or Glendale Civic Assoc. We have so many community organizations but some how we get so little attention its a shame.

Let us know what he says.

A little trick I learned circa 1980, take the plates off the car (throw them inside the car) and the sanitation dept will come pick the car up right quick.

Keep bitching and pray something gets done. Have you called any news stations to put the city on blast? (not that it would change a thing)

Simple.........call 911 (from a payphone) and tell 911 a person is behind the wheel,sleeping.Further tell them the engine is running and there are no keys in the ignition. Give the state/plate number.

Why would they want to tow the van. This way they can keep ticketing it as often as they want.

Where is the Fire Department regarding cars that block fire hydrants?

This is a matter of life and death.

This is the Commissar, once again not giving a good goddamn whether someone is trapped and killed in a fire because the hydrant is obstructed.

Let's burn his ass out of New York.

Cops love parking next to fire hydrants themselves. I have one on my block that does it all the time. I guess it's too hard to park around the corner.

Yeah just like this past Friday when I was on Grand Avenue. I was walking and this car drives and parks partially up on the sidewalk. Then this asshole puts this red light on his dashboard I guess to show he's somebody and gets out to go and drop his clothes off at the dry cleaners he was in front of. He saw me shaking my head and said "Relax"... I shot back... "I will relax when you stop using your so called authority to do whatever you want, it's sure not official business to be dropping off your dry cleaning"... I should have taken a picture of the car and the guy but I didn't have my cell phone with me...

Somebody's not doing their job Mr. Bloomberg. Four of the five areas in the city with the most derelict vehicles are in Queens.

I've had similar experiences with commercial vans parked on the street all night, leaving no spots for the residents. I call 311 and they give the reference #. I look up the reference # on the 311 website and it says that the 104 precinct came during the night and the vans were gone, although they're still there at 6:00 a.m. What bullshit!

Speaking as someone who lives by a fire hydrant, I can tell you that you can park in front of a residential fire hydrant as long as you want, even overnight, and nothing will happen to you.

If I see the a police car in the neighborhood, and I tell them someone is parked in front of the hydrant, then they will give the car a ticket. No one has ever been towed from the hydrant.

I just hope there isn't a dead body in the trunk.

Got a cop in Glendale who parks at the pump at Otto Road all the time.

Dark VW, but i think he has a new car now. Still same placard in the window though.

Doing it for years.

The worst is actually trying to navigate around the 104th, especially if you have a baby carriage, or a wheelchair.

PRIVATE vehicles parked at all times of the day, either on the sidewalk or across the corners. Sometimes you cant even get through.

set it on fire, that will make the FDNY and NYPD come and they will pick it up. this is what residents close to the BQE usually do when presented with same situation.

I wonder if the local FD house would care more?

I'd get a few friends and overturn it right into the middle of the street.

Thank you Councilmember Crowley for towing away the van.