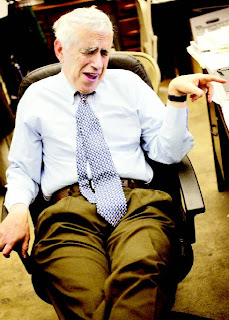 “Highland Park is a border park between a very poor neighborhood and a very rich one,” Stern said. “A lot of it is territorial: ‘This belongs to the uphill people, and the uphill people should decide how it’s used — not the downhill people.’

He later added, “They’re organizing to keep them down at the bottom of the hill.”

Stern believes East New York’s reputation as the city’s crime capital is mobilizing otherwise indifferent Queens residents behind preservationists in an effort to maintain a natural buffer with the Brooklyn neighborhood.

Queens Borough President Helen Marshall is black.
Rep. Edolphus Towns is black.
Comptroller William Thompson is black.
Rep. Nydia Velazquez is Hispanic.
All are in favor of nature over ballfields.
Community Boards 5 of Brooklyn and Queens both unanimously voted in favor of preservation.

Henry Stern lost his marbles years ago and this just confirms it. Why the Queens Chronicle would not only do the bidding of the Parks Department but leave unchallenged someone who obviously doesn't know what the hell he is talking about is beyond me.

Massive tweeding FAIL by the Bloomberg Administration yet again. Keep doing it and Queens Crap will just keep exposing it.

Photo from Newsday.
Posted by Queens Crapper at 12:38 AM

That old gag. The race card is usually the joker.

Why does Shenkler of the Tribune keep featuring this moron's "column" on the Trib's editorial page?

This old homo needs to go away.Your time has come and gone( no pun intended)

This is on the same level as the man who buried Judge Judy's home under mud when he illegally built an unpermitted ballfield on an unsuitable location in the Hamptons.

Judge Judy, "Didn't like kids," The tens of thousands of dollars she was out removing mud from her pool was besides the point.

Ad hominem arguments, are the only arguments that these people can use. If you disagree, you're a bigot, you hate children, you probably poison dogs too.

Meanwhile, no one is supposed to ask why we are eliminating natural drainage in the worst flooded area in the nation, or destroying habitat for valuable migrating birds when there are existing nearby facilities that can be restored and made available for these youths.

But the contracts wouldn't be as valuable--less graft you see.

This racial arsonist (backed by the rabid racist Commissar and his boy toy Benepe (and the racist Lewandowski, who took the job away from a minority - a decision made by racist Stern) is clearly losing the argument. All who pull the race card are openly admitting they have no case.

If the opponents of the idiotic destruction of the reservoir are motivated by the revulsion at seeing kids "lying down in front of them", then can the moron explain why the same opponents are demanding that all the existing ballfields in HIGHLAND PARK be refurbished and improved so the vary same repulsive kids will have a place for sports?

Why is it racist to want to preserve the unique beauty of a place that is home to so much wildlife, so much lush greenery, and that cannot be found anywhere else in Queens?

The moron's remarks tell us much about the appointment process for the people entrusted to preserve and maintain OUR parks.

That the Commissar, Benepe and Lewandowski agree with his ignorant racist remarks tells us all we need to know about them.

If the opponents of the destruction of the reservoir want its beauty preserved for the enjoyment of all, the enjoyment can be had by the "kids lying down".

Stern, the Commissar, Benepe and Lewandowski actually believe that the "Kids lying down" have no knowledge or interest in beauty, and just need to play sports so they don't stray into the neighborhoods of the well born.

This racist quartet probably want to start midnight basketball to keep the folks busy at night since they don't study or have any capacity to rise from the bottom of the hill.

You are reading their confession of their innermost beliefs in those remarks.

This guy is a nut job - there are plenty of stories - I saw him at and event where it looked like he was not only blotto, but slept in his clothes.

The really stupid thing here is yet another example of the piss poor newspapers in Queens.

Poor Henry....once upon a time he fought the good fight. Now he's a shadow of his past.

I think he and "Boomer" (his dog if he's still around) are running things..."Boomer" being the more savvy of the two!

Be gracious and retire...with some dignity still left to yourself.