Bloomberg: "We can't do everything (so let's do nothing)" 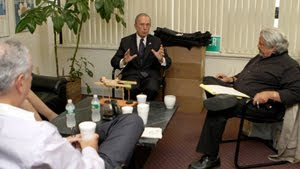 Bloomberg discussed some development issues brought up in Queens, specifically Klein Farm in Fresh Meadows and St. Saviour's Church in Maspeth, both of which have been turned down by or ignored by the City for assistance in preserving the bucolic and historic nature of the sites.

"The Parks Department just does not have the money," Bloomberg said. "There is a fiscal reality here. We probably built more in parks than any administration in modern day. You'd love to do anything, but you can't do everything. You cannot turn every piece of ground in the city into a park; you can't turn every road into a bike lane - although there's a constituency for it- there's an overall concept that we want more parks. If an area is woefully underserved then we have to focus resources, but we are going into a very tough time economically."

Well, Bloomberg's own Parks Department agreed that Maspeth is "woefully underserved" but that didn't seem to persuade Mr. Mayor.

Now, if money is the only issue preventing him from acquiring more parks, why hasn't he gone along when council members and borough presidents have kicked in most of the cash? This is the guy who says that now is the time to plan for the future, recession be damned. With a million more people coming to the city by 2030, isn't the time to plan for adequate open space now?
Posted by Queens Crapper at 1:57 AM

You need new talking points Crapper. You keep repeating the same old debunked assertions over and over again.

It is fact that money was put aside by council members and borough presidents for new parks and the mayor has not pitched anything in, even during the "boom" times. Why not? Why the high line then? Seems to indicate a pro-Manhattan bias.

Good point, Crapper. There was money put in the budget by Helen Marshall to acquire the Cornell Farm but Bloomberg refused to match it. Now the place is in danger of being developed.

Schenkler looks as bloated as his ego!

This mayor is so full of shit. He has given $ 10 million dollars to BP Marty Markowitz's $ 64 million Dream of an Amphitheater in Seaside park. Taking away the only open space park in Brighton Beach. This boondoggle for a Privately run Concert venue will make into a rich man's park, not for the middle class. The 110 foot building will destroy the character of the Community. The Free Concerts done during the Summer - gone. The public will have to dig into their pockets $ 50 & up for music concerts. If the Parks Dept, doesn't have money now for upkeep how are they going to upkeep a $ 64 million venture in a City Park ?

True Crapper, The High Line cannot be maintained and they were trying to pass the cost burden onto the surrounding businesses in the form of a tax. Why did we put such a huge investment into something that we can't afford? They'll raise ALL our taxes for a tourist trap. That money could have created dozens of smaller parks throughout the boroughs instead.

Or, is it the ever attentive to community needs, the former journalist, Jennifer Manley?

Parvizi and Manley. The duo who actually believe their job is to protect the Commissar from impudent taxpayers.

The Commissar is to never be permitted to hear any opposition, objection or even a question of whatever he does with OUR tax dollars.

Apparently the Commissar is far too delicate, too fragile to ever learn that even a single freight-paying taxpayer has a moment of doubt of the wisdom of his deranged policies.

Next time, Anonymous # 1, do the job we taxpayers hired you to perform. Protecting the lily is NOT in the job description.

Time to update your resume.

bloomass is full of shit plan and simple! the only way to get rid of the troll is on election day. they have money to bail out developers, please......

You have to ask this guy these questions while the cameras are running.

Plenty of money for development.

Perhaps the 2030 Plan needs to put the infrastructure in first before the development.

Like Moses building a bridge, put in the structure, then it forces everyone to sustain it as a fait accompli after the fact.

Dont put people asking for real needs in the same breath as the bike nuts.

Funny, the Tower People get parks, and after they meet and mate, they move...

Arn't these Queens weeklies a gem?

The ones that should be ashamed of themselves are the Manhattan dailies starting with the NYT.

Not only is Bloomberg making this city a tourista joke, but he is undermining its very ethos and spirit.

Funny, Bloomberg always seems to find money for his developer friends or if something is to be built in his precious borough of Manhattan. Lucky us, we taxpayers in Queens get to pay for it. Dump his ass on Election Day.

so the PARKS DEPT.has no money? Where is the money coming from to plant 19 trees in a schoolyard
play space at P.S. 159 Q.,destroying the ball diamond?a small track and gazebo cover third base. sewer drains are located under the rim of the B/B half court,and in the center lane of the track. no full court B/B ???? thanks to Q.CRAPPER 15 trees are gone. did
PARKS replant them or destroy them ?what is total cost of this foolish planning? should a public official
at PARKS DEPT. and DEPT.OF EDUC. BE FIRED AND BE
MADE TO REIMBURSE THE TAXPAYERS? according to PLANYC 296 nyc schoolyards will be "upgraded' by 2030.

I guess when the time comes, he'll just eminent domain people out of their homes to make open space.

These lands are available now; he should jump at the opportunity.

This the guy who wants to bring back trolleys. With what money? The same money that could be used to do a park at the St. Saviour's site.

Bloomy also sez we can afford free crosstown buses, but we can't save the Klein Farm.

I see that in the Kommissar's latest pie-in-the-sky, promise-them-anything TV ads he is touting discount prescription cards. Where is the money coming for those? Tweed, tweed, tweed!