Welcome to The Hole 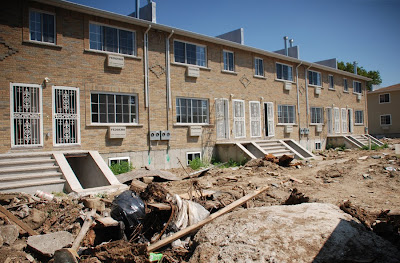 Locals call it The Hole. But few agree on where The Hole is located. Some say The Hole is in Howard Beach, others say it is in Spring Creek or Ozone Park, or maybe East New York or Lindenwood. Residents do agree on one thing - The Hole is famous. Mostly because of the bodies. Or maybe the horses.

Today, the neighborhood has been torn apart by failed development schemes. Besides the empty horse pastures and abandoned houses, the edges of the The Hole are dominated by two large, apparently abandoned real estate projects. At the western edge is a trash strewn, boarded-up row of new homes, and towering above the eastern edge of the neighborhood is a stalled development once named "Cobblestone Estates." According to the NY Times, construction here stopped in 2007, and the remaining mountain of debris has given neighbors below in The Hole "nightmares about avalanches" and a "constant fear of a rockslide."

BloomQuinn's plan to bail out developers apparently doesn't extend into the border towns of Brooklyn and Queens.
Posted by Queens Crapper at 12:00 AM

The border area between Ozone Park and East New York was once delineated by a wide, swampy expanse. Gradually, the swampy creek has been reduced and the neighobrhoods are inching closer to each other.

The problem is that this border area is far from transportation and nobody is buying these crappy brick boxes.

Like a ghost town- you don't even know you're still in NYC. No corner bodegas, no people on the sidewalks. Hell, no sidewalks. I was living in East New York at the time they were exhuming the mafia bodies (2004). There are probably native New Yorkers who don't even know it exists. I had lived here less than a year, and stumbled upon it by accident.