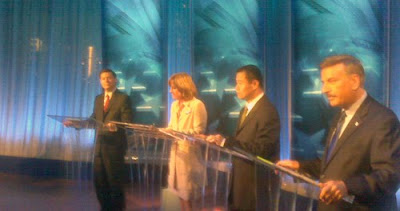 From the WNYC News Blog:

On the last question, WABC moderator Dianah Williams asked each candidate to grade Mayor Bloomberg’s performance and the field got to mix it up without the aid of well rehearsed stump speech snippets. Councilman David Yassky bristled at grading.

Councilman John Liu was quick with the red pencil.

Liu: “A in the first term, B in the second term — up until the extension of term limits and than an F right after that.”

Councilman David Weprin finished up, trying to use the moment to define the field.

Weprin: “He was doing a B until he overturned term limits, which I strongly opposed because I thought the public should have had a right to say, unlike my two opponents Ms. Katz. and Mr Yassky.”
Posted by Queens Crapper at 1:23 AM

Weprin has got my vote. Besides being one of the better politicians from Queens he actually knows finance and is qualified to be the comptroller of our city.

Weprin is dumb as Frank's dining Table. I chose the qualified and that is Yassky. Liu is a crook and Liar and Katz is a real estate developer;s best friend.


And Yassky is not? Come on, we read blogs, not the dailies or weeklies.

Try a Letter to the Editor at Gary or Vicki's crap.

Katz is head of the Land Use committee and gave the real estate developers the green light with all her zoning. Yassky is not. How about giving some facts. Yassky has pushed for help for small businesses and for more affordable housing. His campaign has set up an inventive Web site — ItsYourMoneyNYC.com — that opens the city budget to more scrutiny, a preview of his promise for more transparency for city finances.

Miss Heather has a post coming up about Yassky. It's not going to be pretty.

Yassky is the most qualified candidate and I support him 100%. Liu is a liar, he lied about the office he was seeking and even gave 10 grand to corrupt working family party for their endorsement.

To me this suggests three corrupt bargains Yassky has clearly been a part of. How many more such corrupt bargains are out there that Yassky was part of that we don't yet know about. Keep these scandals in mind as you watch Yassky's latest commercial. Also keep in mind Yassky is running a distant third in the race for Comptroller, so it seems like no one really is buying his bullshit.

Here is an interesting page from the Yassky website. Apparently the EDC has 0 employees and a $23 million budget!!?!!?! Thanks for the accurate information. Hey Dave, keep up the good work!

And the official budget:
www.abo.state.ny.us/annualreports/PARISBudgetReports/FYE2010/LDC/NYCEconomicDevelopmentCorporation2009-10.pdf

Mole333 from Daily Gotham is total bullshit and the Atlantic Yards was voted in favor by LIU as well and all the taxpayers money was directed by BLOOMBERG.

Atlantic Yards was voted on by Liu?

It's a state project with no city oversight.

In defending the new deal, MTA Chairman Dale Hemmerdinger says, "The real estate market is a whole lot weaker than it was in 2005." But some officials, like Councilman David Yassky, are highly displeased to see the bailed-out MTA sell prime real estate for so little; he tells the Daily News, "I stood up for this agency to say ... they need the money to keep the bus and the subways running. If you turn around and say, 'Oh, forget it, we don't need the $100 million, we'll just take the 20,' it just undercuts everything.
http://gothamist.com/2009/06/25/atlantic_yards_staying_alive_thanks.php
LIU WAS SILENT

Going back to February 2008, Yassky produced an op-ed style position article for the Gotham Gazette relevant to his run for comptroller. It came out just in time for the annual and influential Brooklyn Heights Association meeting. It criticized the amount of resources being plowed into Atlantic Yards:

We should also eliminate corporate welfare. . . .

Of course, the single biggest example of corporate welfare is the proposed Atlantic Yards development. The Bloomberg administration has agreed to give the project's developer at least $100 million in direct subsidies, plus another $400 million to $500 million in tax breaks. In the current financial climate, this handout is impossible to justify.

Yassky is the biggest horse's ass running. He couldn't win for Congress in Brooklyn so now he's running for Comptroller. He's an opportunist and a do-nothing. No one likes him in government and he is NOT a consensus builder.

Vote for Weprin. He's the least dishonest of the bunch. Isn't it a shame we have slim pickings when it comes to politicians? Not a truly honest one in the bunch.

I'm a simple man.I can't vote for someone who Has a-s-s in the middle of his name.It doesn't give me any confidence in what his future performance and current character holds.But as i said i'm just a simple uneducated voter,

Anonymous said...
Weprin is dumb as Frank's dining Table. I chose the qualified and that is Yassky. Liu is a crook and Liar and Katz is a real estate developer;s best friend.....

Yassky voted for extending Bloomberg's term without letting the people decide.
Corruption at its most obvious.