More on why crime is down 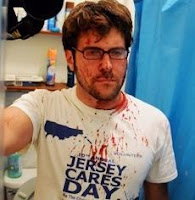 The following days were filled with paperwork, outrageous medical bills and uncooperative police officers. In order to get my crime victim’s reimbursement from Bellevue I need an incident report number from the 83rd precinct but, to this day, they claim they do not have the report. It’s funny to be on the “victim” side of a crime for once — cops treat just as if you were the criminal. I have now learned their lack of respect is applied to all beings.
Posted by Queens Crapper at 12:21 AM

I cant beleive this guy is more upset at people wh asked:
story have been upsetting, to say the least:

“Was he black?”
“When are you going to get out of that shit hole?”
“You should carry a knife or a gun with you at all times.”

This guy sounds like those liberals from places like Denver and Masshole. ----friggan clueless!Good for him for fighting back but he should get a CCW working those hours in that area.

The 2 guys watching lookouts !
The lookouts likley ran back into the hallway, up the stairs to the roof crossed over and down some fire escape to a rear yard on the next street.
Thats how the corner men and old Italians caught crooks. They took ZERO crap and made public examples of people as a warning.
In the 60s thieves would get a beating then have their hands slammed in car hoods ---Big 60's car hoods.

These hipsters need to get wise and grow some balls fast because its only going to get worse with economy and jobs tanking. Bushwick isnt Denver or Londonderry.

One respondent said it well: "the end of any twisted pride I had for living in a tough neighborhood. Things that used to seem diverse and full of life: street crowds, noise, filth; now often seem menacing and discouraging."

"Resent" you as a privileged (and naive) slummer.

"Fear" that your kind will drive up rents...and them out.

My group has three restaurants in similar areas, I have long visited them, spoken to the locals and I am out before dark.

this guy is SO streetsmart.

what did he expect ?

Anonymous said...
These hipsters need to get wise and grow some balls fast because its only going to get worse with economy and jobs tanking. Bushwick isnt Denver or Londonderry...

This guy needs to shut up before somoene born and raised in Ridgewood kicks his ass for shootin off his mouth like an idiot.

Typical hipster with his exageratting story.

"I stared down at my white T-shirt to find it was covered in blood. Covered in blood? It looks like little trickles that doesn't even go past his chest."


If you get beat up by an umbrella you deserved to be beat up. What happend to tough 70's 80's and 90's new yorkers? My mother can fight off someone who is trying to attack her with a umbrella.

Victim of a crime? Ha look at all the people who are being assaulted AND then arrested by all these Irish Mafia and Italian cops. Those are the real victims.

NO SHIT !
I was born and raised in Bushwick and Ridgewood.
I have 1920's Stier row house on Seneca and Norman. Its all original, nice woodwork, gas heat, rear outdoor porch. I rent to these refined Polish familys.
Last year the guy next door rented to one of these yahoos who decided to have a booze filled fireworks party on the roof, with roman candles and of all things a shot cake and GROUND FLOWERS !
(Those thing spin around and burn as hot as blow torches)
My tanants called the FD, I had to drive in.
A ground flower had bounced over dividing capping and lodged by the by the staircase skylight somehow shooting gunpowder and jets of gas into the house.
Bunch of girls are saying they are so sorry till one wise ass comes over to Zak my tennant and myself and starts yapping like a lawyer "No you aint nothing but a liar" "you cant proove it blah blah"
I SWEAR NO F*CKING BRAINS !
What would have happened has one of these fireballs went over the side on top of somebody sitting on the porch ?

All this wile the fire marshall was grinning wile documenting all the burnt paper, BBQ, table, umbrella, pup tent, match heads on the next door roof
I since put locking caps (with torx)on all the vent pipes on the roof.

Stupid libs! I've said it before.THEY don't like you!!!!!!!!! I know that guy! his first name is VIc,middle name,Tim.....HAHAHAHAHAHAHAHAHA

I just noticed on the laptop this that wearing some type of advocate rabble rouser T Shirt from New Jersey !!!
Question is Why ?

That or a Boy George Sex Pistols T is sure to get you an ass kicking in Ridgewood, Tremont let alone Bushwick.

as Bugs Bunny would say:

Hmmm, see if you're bleeding from the head in NYC and the EMTs come, you have no choice, you MUST go to the hospital. I know because my father hit his head Thursday and they forced him to go to the hospital. Also, my father only needed two staples and he was basically covered in blood, so if this guy needed EIGHT staples, I think he would have been unconscious and definitely too bloody too get in a cab...

“Stop doing this … you’re fucking ridiculous … this bike isn’t worth shit … you know the cops are coming soon!”
--------------------------
Um, I gues the bike is worth getting bloodied, paying for a cab to Manahattan (since you overpaid to live in a neighborhood with poor medical facilities), days of paperwork and a hospital bill :)

Is that a $4000+ LECIA Digital SLR with a press qualiety zoom lens in that photo ?


A good 1/2 of these hipsters need lessons from the NATIVES (as well as learn to live and PLAN with them). Think its gonna happen...NOPE and why is this ?

Perhaps because these trust fund brats think they are better and flamingly and RECKLESSLY act like it ?

Do Italians, blacks, latinos, Polish throw parties until 1-2 every dam night NO THEY HAVE TO GO TO WORK !!!.
Real estate in Ridgewood and Bushwick is taking a sh^t because all the mommy's and daddy's wont or cant pay the rent anymore.

PLEASE GO HOME TO BEANTOWN & BOONSVILLE WHATEVER and take the Mayor with you !

NO SHIT !
I was born and raised in Bushwick and Ridgewood.
I have 1920's Stier row house on Seneca and Norman. Its all original, nice woodwork, gas heat, rear outdoor porch. I rent to these refined Polish familys.
-Joe

Joe,
If you were born and raised in Bushwick - Ridgewood then you remember how every street was literally burnning with fireworks every 4th of July for as long back as I can remember until Giuliani became mayor. I remember how the streets were bathed with red firework rappers the morning of July 5th.
Back then there were no hipsters.

Yeah red papers in the street.
Yes in the street, in clearings, parks at curb. Silver Jets, Festival balls, bottle rockets I must have lit 1000's of them.
(for you transplants the tool of choice for lighting was called a "a punk")

Anyway...never Ground Flowers and 500 shot Cakes up on the roof ....thats a big difference.
Nobody shot "ground stuff" on the roof we all knew better duh !

I dont know anybody beat up with and umbrella to boot.
My grandfather did fill an umbrella handle and shaft with lead for my grandmother (at her request) but she never had to use it.
That was very common with the old Italian and Polish women in Bushwick and Greenopoint.

WaaaWaaa - Whiny little girl. Be a man would you.