Breaking News: Queens has a lot of chain stores 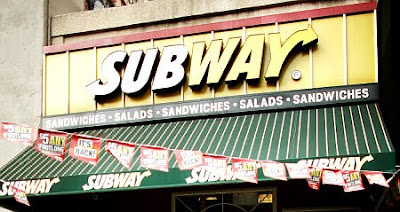 Attention, Queens shoppers: The nation's largest retailers are making it easier to shop in your own backyard.

The borough has 1,448 national chain stores - the second highest in the city, according to a new survey by the Center for an Urban Future.

It's only bested by Manhattan, which has a staggering 2,552 national retail stores.

"Queens has a lot more wealth [than some other boroughs] and it does have some really popular malls and established shopping districts," said Jonathan Bowles, executive director of the think tank.

"Up until five or 10 years ago, Queens was probably very underretailed," he said. "There were a lot of working- and middle-class people who drove out to the suburbs looking for shopping values and different options."

Dunkin' Donuts tops the list with 132 stores in the borough, followed by the Subway sandwich chain with 81 stores, Baskin-Robbins with 67 stores and Rite Aid with 63 stores.
Posted by Queens Crapper at 12:42 AM

Up until about 10 years ago queens had a rich diversity of Mom & Pop stores where you could go for help and products. Now you have a bunch of junk stores that hire uncaring workers that don't know the products in the store and can't answer a simple question like "what are the store hours"

Subway is probably the best thing that happend to QUeens. Going to your nearest deli for a $7 hero SANDWICH that has rotten meat and stale bread. I prefer a $5 chicken breast foot long with every vegatable on it. I don't know about the other retail stores that have been emerging in QUeens but Im not going to be complaining about subway.

Drive down nothern boulevard in Flushing and you'll see a Mcdonalds, Burger King, KFC etc...
You'll also see a whole lot of Korean stores in which you cannot read any of the sign and will probably never go into. BRING ON THE AMERICAN RETAIL STORES I SAY

Where have all the diners on Northern Blvd. gone? Secondly, why is the food at most diners so crappy? Brown-tinged iceberg lettuce in this day and age? Everything is so pre and over-processed that it doesn't have any flavor anymore. It's pretty pathetic that people now think that Subway offers good food. Guess they've never been to Whole Foods or Dean and Deluca for a sandwich. Expensive, yes - but they offer really good food. I'd rather pay $2.00 more for something great. Too bad Queens is considered too down-market for the better food stores. Can't wait for Fairway to open!

Chains dont give a crap like the mom and pop stores of a decade ago. Those guys used to work with the business districts, donated to local little leagues and the like, and often lived in the community.

What is a DuaneReed or Ritaid but something to keep a taxpayer earning a dime for its speculator until they can figure out how to squeeze more money out.

Yet another idex of the decline of Queens.

Delis were fine when old Italian and German men ran them.

Now its Indian and Spanish and no, unless I was ghetto, I would never get a sandwich from there.

Going to your nearest deli for a $7 hero SANDWICH that has rotten meat and stale bread.

Maybe in some of the slummy areas, but by me the Deli's beat out the Chain shops in both cost, quality, and options.


For one, you actually can see the suppliers of the deli meats (Boars head, for example). Where does Subway get their meat? it shows up in huge sealed metal pans.

Second, bread gets delivered daily to most delis. Hell, if you have to time it right just to make sure you get the bread you want, or its gone!


Third, i see they got you thinking you are getting a good "deal" buy giving you 3 slices of turkey and then loading it up with cheap veggies.

I'll take a deli sammich where the meat is falling out of the thing.

Oh, and it often costs less than subay.


Finally, how can you run a sammich shop and only have 3 kinds of cheese??? Subway doesn't seem to think people enjoy eating Munster, Cheddar, Mozzarella, Jack, etc, etc.

Delis were fine when old Italian and German men ran them.

Now its Indian and Spanish

I dont mind the spanish owners so much, its the Muslim/Hindi that give me a problem, and its of no fault of my own.


Can i get a Turkey on rye? sure.
Ham on Whole Wheat? Nope, sorry, no ham.

Maybe in some of the slummy areas, but by me the Deli's beat out the Chain shops in both cost, quality, and options.

Impossible i've come across $4 chicken cutlet sandwiche on a roll with lettuce, tomato, onions, american, cheese and mayo on the Van Wyck on 101st avenue.

A 5 dollar foot long beats them both. Speaking about subway, their opening one on main street right off the northwest exit/entrace of the 7 train (next to game stop) just 2 blocks from the one on Union street. A subway sandwich right outside the subway.

You just don't know what you are going to get when you walk into a unfamiliar deli. I stay away because, even with a Boar's Head sign on the outside, you don't know if that chicken breast was dropped off yesterday or in *2008*. I have never had to throw away food I had just bought at SUBWAY like I have had to do at delis.

If all these delis had been serving quality food over the last 20 years they would have thrived, and never let the chains take hold in Queens.

Some delis may be good but with no many that are just crap, the good will die as well with them.

Couldn't agree more with you poster #9.

Anyone know/remember about the Quiznos on 165th and northern... ITS gone. Those Asian owners ran that place like a hater factory. I used to get an $8 roast beef and ask for extra BBQ sauce and they would tell me no or pay 50 cents...
I hope they replace that with a subway.

It's getting difficult for a lot of people to afford homes in Queens these days. Can you imagine the high rent that a small business is being gouged with? I was surprised to recently learn that the highest rises in the price of real estate is occurring in Queens. Can you beat that?