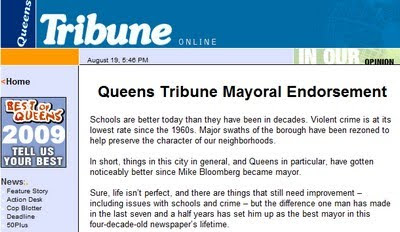 Mayor Bloomberg has landed his 20th newspaper endorsement from the Queens Tribune, which did not stint in its praise, saying the difference he has made in the city since taking office "has set him up as the best mayor in this four-decade-old newspaper’s lifetime."

The Queens Tribune was founded by Rep. Gary Ackerman, who still maintains an interest in the paper. Ackerman is one of several Democrats who have crossed party lines to endorse Bloomberg's bid for a third term.
Posted by Queens Crapper at 1:33 AM

We'll dump the Commissar this year.

Next year, we'll turn our attention to moron Ackerman.

When are these politicians going to ever realize that WE pay ALL their freight (that flower in his lapel is at OUR expense)? WE pay Ackerman's salary, housing, travel, food (obviously a big, big item), clothing, entertainment, and even his political expenses. Without his persistent sucking on our teat, he is just another unappreciative homeless bum.

If they are not working to represent OUR interests, they're using OUR money to advance THEIR OWN interests.

What is with all these newspapers???

It's been said that Ackerman had once misappropriated funds from a student union while in college and was tight with the notorious felon Tommy Huang. Is that true?

Michael Nussbaum was in cahoots with Jeffrey Lindenauer, Manes and the rest of the gang during the Parking Violations Bureau scandal that rocked the early 80s.

Wadda ya expect from all of these "sterling" thugs!

H-m-m-m...they all seem to be of the Jewish persuasion.

Being Jewish has nothing to do with it - all faiths have slugs and heros.

There is only one game, the clubhouse game.

There is only one purpose, to make money purpose.

There is only one interest, the money interest.

All those papers talk about maintaining the traditions of Roosevelt and Kennedy and fighting for the common man.

They are full of shit.

The newspaper publishers are not the ones of Jewish persuasion, the sterling "thugs" are:

Can't handle the truth about the chosen people? Tough shit.

They want their own Jewish juries to make their legal decisions. This isn't Israel, losers. You want to stay in your closed societies where you give each other advantages and screw the outside world, then you deserve every criticism.

Ever notice when a Jewish person is criticized it's automatically anti-Semitism? Kind of like Paterson assuming people hate him because he's black and not because he's a bad governor.

Crapper - thanks for not chiming in to criticize the bigoted, ignorant anti-semitic comments. Your silence is deafening.

Yes it must mean I hate Jews. Even though I have them in my family.

If you spend all your time looking for comments to get upset about and rebut, you'll waste your life.

How much money did he pay the paper for his endorsement? Maybe he bought the paper and will make them print only positive things about him. Just wondering!

Anonymous said...
Ever notice when a Jewish person is criticized it's automatically anti-Semitism? Kind of like Paterson assuming people hate him because he's black and not because he's a bad governor.

Nope. I have no problem when people are criticized as individuals (exampe: the shots people here take at Bloomberg, who richly deserves it--no pun intended). It's when people say things like "They want their own Jewish juries to make their legal decisions. This isn't Israel, losers. You want to stay in your closed societies where you give each other advantages and screw the outside world, then you deserve every criticism", taking shots at everyone within a religious group that speaks of the hatred that dwells within the hearts of people.

Did anyone ever consider that those who have endorsed Bloomy just might think he'd be a better mayor than Bill Thompson?

Or less bad,to put it another way.

Based on what? His stellar record of made-up statistics, his ability to make an even larger financial mess or his grandiose ego-stroking plans to make NYC into a pristine utopia? Oh, wait, I know - it was the multiple crane collapses and development at any and all cost.

It's too early to endorse. It's like putting on a Christimas decoration in October.

It would have been better if The Trib had waited a little longer before endorsing.

I think the anti-semetic comments comes from clubhouse hacks trying to discredit Crappy.

Crapper can criticize the bigoted comments but he chooses not to. Probably because these bigots are his supporters in his arguments. Sad.

Cool. You basically just proved the comment before yours is true.

Why isn't the Daily News expected to answer the bigoted comments on its website? How about Curbed? Gothamist? The NY Post?