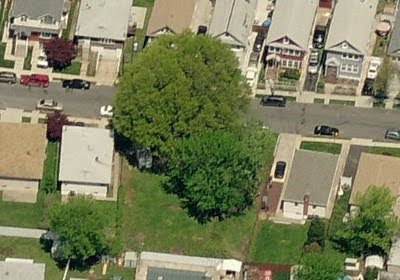 From the Staten Island Advance:

Long-time residents of the block remember playing in the lot when it was an open field dotted with seven stately old oak and chestnut trees. The former owner lived across the street for many years, and maintained a large vegetable garden on the land, they said.

The lot was sold several years ago, according to residents. On Aug. 14, 2007, all of the adjacent property owners received an "Excavation or Demolition 5-Day Notice" by certified mail from the architect of record. The letters, required under Department of Buildings regulations, informed them that new construction would commence on the site on or five days after the date of the notice. Several months later, "the day after Thanksgiving," Ms. Castellucci recalled, "they came and cut down all the beautiful trees."

And here's what's there now: 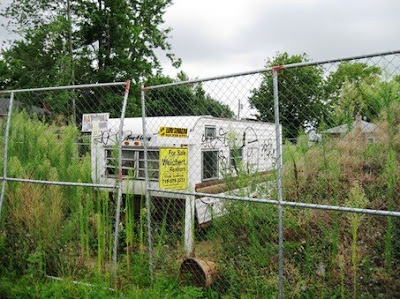 "We ran out of money last year, and we could not get money from the banks," said Sam Xhelili, one of the company's partners, who declined to give his last name in a telephone interview. "We're trying to get someone to buy it, but nothing yet."
Posted by Queens Crapper at 12:32 AM

Chestnuts are endangered too. Not only ugly, but very wasteful. Remember the bible:

Luke 14:28-30
"Suppose one of you wants to build a tower. Will he not first sit down and estimate the cost to see if he has enough money to complete it?

For if he lays the foundation and is not able to finish it, everyone who sees it will ridicule him,

saying, 'This fellow began to build and was not able to finish.'

what a shame reminds me of Saint Saviours :(

why does the city screw neighborhoods? stop autioning off lots unless they have the ability to produce something back into the community. too many damn developers screwing neighborhoods and we're suppose to feel sorry for someone who can't get a loan...

A green lot on a block of uniform suburban homes.

Even in Levittown, the builders left some green space, so that the earth can absorb groundwater.