Mike says you can just tune him out 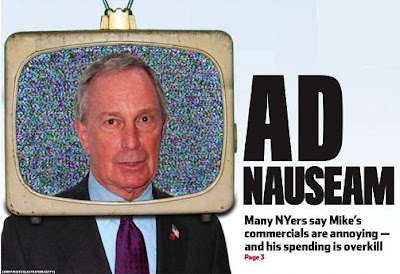 At a press conference on Broadway, where Bloomberg stuffed boxes to be sent to members of the armed forces stationed overseas, a reporter pressed Bloomberg on his ads--which, a poll said, annoy voters.

The ads are “somewhat unavoidable,” said a reporter from the Associated Press.

“You don’t ever see your ads?” the reporter asked.

How about when your campaign calls my house or knocks on my door to tell me how great you are? How do I avoid that?
Posted by Queens Crapper at 12:14 AM

Since the losers that run the self proclaimed media capital of the world dont have the balls to do it, why dont you Crappy take the Mayor's pronouncements and contrast it with reality.

That should be fun.

The ironic thing will be that his campaign will see how seriously bad the Quinnipiac Poll numbers are for our dislike of these ads, and then create yet another ad to address the issue!

BTW, I have gotten to the point where I'm snarling comments to the TV when those ads appear -- about how much of a liar and a phony he is. This latest one about bettering the lives of middle-class New Yorkers in the form of discount prescription drug cards and tuition assistance and help for small business are yet more nonsense that he expects the sheeple to eat up without any questioning.

"Mike says you can just tune him out"

Don't worry Bloombucks, I already have.

They call my house constantly. I spoke to a staffer once and gave him an earful. This is the mayor who fostered overdevelopment that nearly killed me. How should I vote?

Well Mayor Dictator that's just what I do, every channel that your ad's come on I turn the channel.

It's only going to get worse between now and Election Day. Does anyone think that he's going to reduce the number or ads that are run on TV and radio or cut back on the number of mailings that go out?

Too bad the media is bought and sold. I would love to see a reporter challenge the "facts" in these ads! Independent media? I'm sure that his campaign dollars are keeping many media outlets afloat.