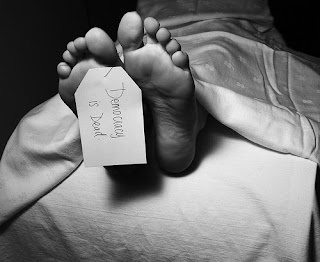 (AP) An Army veteran has lost his legal battle to get onto the Democratic ballot for a New York state Assembly seat.

A federal judge in Brooklyn rejected Farouk Samaroo’s bid to block the special election in a Queens district where the candidates were chosen by party bosses.

The 26-year-old Samaroo recently served in Afghanistan. He represented himself at a hearing on Thursday, arguing there should be an open primary. But the judge told him the special election was valid, and that he could still run as an independent.

Elections are now required to be "cost-effective" and "expeditious"?

And Paterson thinks it's racist to criticize him?

Well, here's a racist comment: Paterson is an ignorant moron!

Can't he see the damage he does?

Here's hoping that Samaroo either continues to run, or appeals this ruling.

Either way, notice how the city papers wrote about his fight for the ballot, but failed to follow up, once he lost in court.

Either way, Paterson is toast. He's a lame duck who has no chance of being elected.